Editor’s note: Collegian editors Gabe Brison-Trezise ’16, a political science major from Thetford, Vermont, and Henri Gendreau ’16, an English major from Bainbridge Island, Washington, interviewed FBI Director James B. Comey P’16 before Comey’s keynote speech at “The Expectation of Privacy: Encryption, Surveillance and Big Data” conference, hosted by the Center for the Study of American Democracy. The following is a transcript of their interview.

Henri Gendreau: Director of the FBI James Comey, thank you very much for taking the time to speak with us.

James Comey: It’s great to be with you.

Gendreau: I want to start with the Justice Department’s order for Apple to unlock a phone used by a terrorist in the San Bernardino terrorist attack which was dropped last week when the FBI announced it accessed the data with help from a third party. Five days earlier, you wrote the FBI was not intending to set a precedent, but rather that the impact of the litigation “stimulated creative people around the world to see what they might be able to do.” In that sense, was the FBI’s case against Apple aimed less at compelling Apple to unlock the phone, and more at finding a third party who could?

Comey: No. The litigation, the judge’s order was sought so that we could investigate in a competent way and get into the phone of one of the killers. That was the purpose of the litigation. The attention that it brought, accidentally, sort of fostered a worldwide market for creative people to try and find ways to break into a 5c. The details are important — a 5c running iOS 9. And we had tried to do that, we tried to find people inside government, we’d asked everyone in the government, and nobody could. But the attention fostered attention so that a private party came forward and said, “We think we figured out a way.” And that got us into the device.

Gendreau: So the FBI did everything in its power and resources of the U.S. government to try to unlock it.

Comey: We did everything we could think of, we asked everybody inside the U.S. government, including in the intelligence community, if anybody had a solution that might get us into the phone, and nobody did. We asked people in the private sector too, and nobody did. And so we brought the — well, we didn’t, the FBI doesn’t litigate with, the Justice Department on our behalf sought the court order to compel Apple to write code that would allow the court’s order to be given effect.

Gendreau: What does it mean, though, if a third party could have this ability to unlock the phone when members of the U.S. intelligence community cannot?

Comey: It means that there’s not a monopoly on creativity inside the U.S. government, especially when it comes to technology.

Gendreau: But do you think it poses a risk to perhaps the government’s own electronic data if perhaps unknown third parties can do this and the U.S. government cannot?

Gendreau: And you’ve said the impact was that it created, that this third party was able to unlock this, but not the intent — I’m wondering, then why did the FBI choose to file its order publicly?

Comey: That was a decision made by the Justice Department lawyers. I think their judgment was, in the central district of California, that they did not have a reasonable basis for keeping it sealed.

Gendreau: Does the FBI plan on sharing with Apple the means by which the Justice Department was able to access the phone?

Comey: I don’t know yet. We’re still working through that and a number of other policy issues related to the solution that we obtained and the device.

Gendreau: Would it depend then on the given situation? What would the benefits or drawbacks be of letting Apple know about how the Justice Department was able to access this?

Comey: The drawback, obviously, would be that Apple, I think, given what they’ve said about not wanting to help us get in in the first place would attempt to make obsolete the solution and so we lose the ability to access similar phones in similar situations. That’s an important consideration. But we haven’t — it requires a whole lot of thought because we want to be careful and thoughtful about it inside the government and we haven’t come to that conclusion yet. But sure, it would end our ability to use this particular tool, again, on a 5c running iOS 9, which is a bit of a technological corner-case to begin with, frankly.

Gabe Brison-Trezise: You told Congress last month that you were very close personally to the investigation into Secretary of State Hillary Clinton’s use of a private email server while she was in office. What did you mean exactly by being “very close personally”? And, relatedly, have you involved yourself to the same degree in responding to any other such security referrals, or is this case exceptional in that way?

Comey: Good question. What I meant was, I get briefed on it regularly, quite often, to understand where the matter sits with a focus. My interest is making sure we have the people, the expertise, the technology we need to do this investigation well, and second, I want to ensure that our folks are able to do it without any kind of outside interference whatsoever, from any source. And that’s why I’m staying close to it. I think in my time as director, there’s a few other matters that I’ve stayed close to to understand where they are, but there aren’t a bunch of them. There’s a small group of cases that I stay close to, and this is one of them. I mean, it’s not exceptional in that sense. The bureau gets involved in lots of matters that are subject to intense public interest. We just talked about San Bernardino. That generated a huge amount of public interest and attention, and so in that sense it’s not exceptional. Again, I aspire, and the whole FBI does, to do our work competently, honestly, independently and promptly. As I’ve told people, we always want to do it well. That’s our first consideration. Our second is, given that the public is intensely interested in San Bernardino or in this investigation involving this email server, we want to respond in a way that is reasonably prompt. But we always want to do it well. That’s our first consideration.

Gendreau: In 2004, predicated on your refusal to authorize the continuation of a classified program, you were intent on resigning as acting attorney general, even after the Madrid train bombings the next day. I’m wondering, as the director of the FBI, how would you respond to orders from the next president to employ methods of interrogation that are currently illegal under international law such as waterboarding or actively targeting terrorists’ families?

Comey: You’re right. Our number one priority is counterterrorism. A huge feature of that is the threat posed by the Islamic State. There’s obviously a hole of government strategy against the Islamic State. Our piece of it is to try and protect Americans here at home from attacks. And so there’s a number of strategies we engage in there. One is to try to understand who might be consuming the poison of the Islamic State, especially that which is coming through the internet and then radicalizing toward violence and trying to disrupt them. And so that involves court-ordered electronic surveillance, it involves sources, it involves undercovers. It’s a multi-pronged approach. But the goal is to try to find those needles in the haystack that are on their way to killing somebody and disrupt them, first. Second, and do that, so that we send a message that changes people’s behaviors. Either people who are thinking about traveling to be with the so-called Islamic State or killing people here know that they should be afraid of what would happen to them if they moved down that path. There’s probably other aspects to it, but that’s what first comes to mind.

Gendreau: Moving on to another subject. Everyone’s a little bit racist, you said last year in a speech at Georgetown University quoting the musical Avenue Q. How do institutions like the FBI, how does law enforcement work to resist racism in a significant way?

Comey: First, by talking about it. By acknowledging that we all carry, as you mention, latent biases. That’s one way. We spend a lot of time in training of our people to try and address that, to raise their consciousness. Second, by talking about the FBI’s own history, particularly our interaction with Dr. Martin Luther King as a way of demonstrating to our people the dangers inherent in becoming unconstrained by oversight. And then by trying to recruit as diverse a workforce as we possibly can, not just in our special agents, although that’s very important because they interact with the public, but in the rest of the organization. Those are probably three prominent ways we try to deal with it.

Brison-Trezise: One final question for you, Director Comey. In a news analysis piece in the New York Times last year about President Obama’s final State of the Union address, Peter Baker wrote, “A certain number of relatively low-level terrorist attacks may be inevitable, and Americans may have to learn to adapt the way Israel has.” Do you agree with this assessment? Do you think the United States and perhaps other Western countries may need to get used to more frequent acts of terrorism?

Comey: I hope not. The United States sits in a very different security environment than Israel, a very different neighborhood. We’ve brought resources to bear since September 11 that are extraordinary so that we never have to live in that world where we accept it, and so no, I wouldn’t concede that. We have a very difficult job, especially, one of the things I’m going to talk about tonight is encryption, especially when we’re looking for needles in a haystack, and it’s a nationwide haystack, and a needle can go invisible on us — very very hard. But that doesn’t mean we should say to ourselves, “We gotta get used to people blowing themselves up” or killing innocent people by the dozen.

Brison-Trezise: Thank you so much for your time. 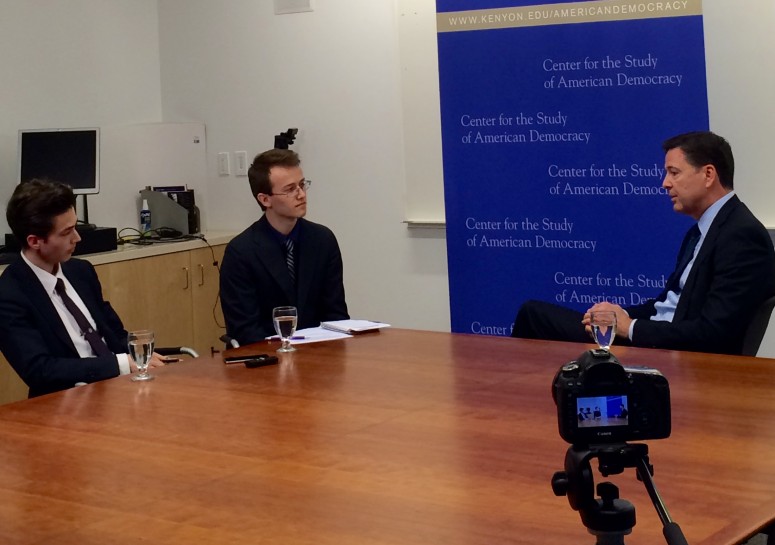 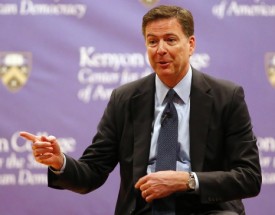 More about Director Comey's address at the CSAD conference. Kenyon students earn praise for their engagement with FBI Director James B. Comey P'16 during his keynote speech at the CSAD conference.