In a post on the blog “Lawfare,” scholar Benjamin Wittes praised the way Kenyon students interacted with FBI Director James B. Comey P’16 during his keynote speech at “The Expectation of Privacy: Encryption, Surveillance and Big Data” conference, hosted by the Center for the Study of American Democracy. Wittes’ post is reprinted below with permission from Lawfare.

A Shoutout to Kenyon College

It's been a bad few years for the free exchange of ideas on campuses around the country. Barely a day goes by where we don't read some story about students at elite institutions trying to silence one another's, or faculty's or visitors', points of view. So I think it's worth noting publicly the model of student engagement on a serious, difficult, emotionally laden issue on display last night at Kenyon College when FBI Director James Comey spoke at this institution in Ohio.

At this event, Comey gave a speech laying out his views of encryption and the Going Dark problem. He then spent a protracted period of time taking questions from students and members of the community. A few notable things didn't happen at this event: Nobody tried to shout him down or disrupt the event; nobody denounced Comey or used disrespectful language. No epithets were spat out.

A few other notable things, on the other hand, did happen: People listened; and people engaged. The house was very full, and a lot of people —many of whom certainly disagree with what Comey is saying and trying to do--posed serious questions and got answers to them. The student questions were remarkably sophisticated, and tough. One young woman asked Comey whether the United States would some day have to apologize for FBI activities the way it finally apologized for the internment of Japanese Americans during World War II. Another asked him to comment on Foucault's panopticism and recommend he read Foucault (Money quote: "Look him up. He's a cool guy!"). This is an important form of intelligence oversight. And it only works if the atmosphere is tolerant of debate and discussion.

So here's my question: What is Kenyon College doing right that so many institutions of higher education are failing at so miserably these days? And here's a question to the presidents and administrators of the many elite institutions around the country that pride themselves on their engagement with ideas the matter: What would have happened had this event taken place at your institution? 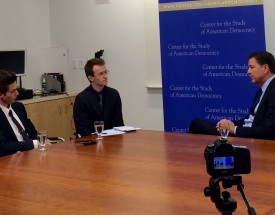 Read the interview with James B. Comey Jr. P'16.
Join our path forward.
Give To Kenyon
Loading