Aspiring journalist Henri Gendreau '16 shopped for a college with two priorities in mind: He wanted a liberal arts education, and he wanted opportunities for practical experiences.

Kenyon filled the bill, more than some of the nation’s top journalism schools.

“I think a broad-based education is important in journalism,” said Gendreau, who majored in English, “and the best way to learn to be a journalist is to practice it in a professional manner.”

The student-run newspaper, the Collegian, where Gendreau served as editor-in-chief, proved to be another recruiting tool. “Of all the schools I visited, Kenyon had the best student newspaper,” he said. “The design was more compelling, and the writing was crisper. It just looked more professional than the others.”

Connections he made at Kenyon with contacts such as Mark Ellis, former associate vice president for communications, and College Historian Tom Stamp '73 — both former journalists — helped Gendreau land internships at the Mount Vernon News and the Columbus Dispatch that complemented his on-the-job training at the Collegian.

A class titled “Explorations in Literary Journalism” and taught by Associate Provost Ivonne Garcia — a former city editor in Puerto Rico — left a lasting impression on Gendreau. “It had a big influence on my writing and improved my clips,” he said.

As Collegian editor, Gendreau encouraged coverage of the Village of Gambier and the Knox County community as well as of campus. “One of my first assignments at the Collegian was to cover a village council meeting,” he said. “In addition to being a college paper, we are Gambier’s paper, too.”

He also gave students a forum for long-form commentary and stories when he helped found the Collegian Magazine last year.

Since graduation, Gendreau has spent his time traveling, and will land in Washington, DC in the fall as an intern at Bloomberg.

It often has been said that journalism is as much a calling as an occupation. Gendreau, a native of Bainbridge Island, Washington, heard his muse when he drew a political cartoon lampooning an administrator for his middle school paper.

“The principal called me into his office and said all kinds of cruel and hateful things to me. That was the moment when I realized this is what I want to do.” One of the Best

The Collegian Magazine wins a top award from the Associated Collegiate Press. 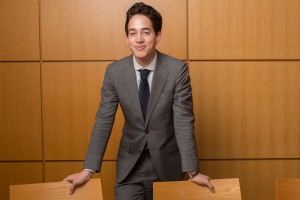 Aspiring journalist Henri Gendreau '16 is planning for his future through internships and his work as Collegian editor. 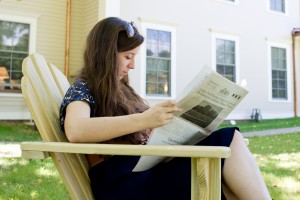 Missing the Hill? Read about campus life back to 1856 through a new online collection of the student newspaper.