How does one person’s free speech impinge on another person’s freedoms? When does hate speech become violent? Are college students obligated to listen to speakers whose views they find appalling?

These questions and more were dissected during the Center for the Study of American Democracy’s fifth biennial conference at Kenyon on Sept. 27-28. Titled “Free Speech, Civil Discourse,” the event featured politicians, journalists and academics from across the ideological spectrum. Kenyon students and community members had the opportunity to listen to, engage with and question these experts during a series of panel discussions and lectures.

The question of the conference “speaks its own importance,” said Tom Karako, director of CSAD. “Every day, we see something in the news about free speech, the state of discourse on campuses around the country, the tone of political exchange more broadly. Free speech is at the foundation of liberal democracy, but civility is also an element of a self-government.”

Jeffrey Rosen, president of the National Constitution Center, delivered a keynote address on the topic of “Free Speech and the Constitution” to conclude the conference’s first day. Rosen is also a professor at the George Washington University Law School, a fellow at the Brookings Institution and a contributing editor for the Atlantic.

Former Vermont Governor Howard Dean, who later served as chair of the Democratic National Committee, participated in the closing panel of the conference, titled “Civil Discourse and America.” He was joined by Harvard University psychologist, linguist and popular science author Steven Pinker and Heather Mac Donald, a conservative columnist at the Manhattan Institute. Dean, who may best be remembered for his 2004 “Dean Scream” presidential run, recently has made headlines for claiming that the First Amendment to the U.S. Constitution does not protect hate speech, contrary to rulings by the U.S. Supreme Court.

Another panelist, First Amendment expert and law professor Eugene Volokh, clarified that speech must be “intended to promote imminent illegal conduct” before it loses constitutional protections. Other prominent panelists included Laura Kipnis, a professor of media studies at Northwestern University who has critiqued higher education sexual harassment policies; and Allison Stanger, a political scientist at Middlebury College who was involved with the conservative author Charles Murray’s infamous visit to that campus this year. Nadine Strossen, former president of the American Civil Liberties Union, also delivered remarks addressing the question “Is Free Speech the Enemy of Civil Society?”

“Free Speech, Civil Discourse” took place just 17 months after the 2016 “Expectations of Privacy” conference, which featured a keynote address by then-FBI Director James Comey P’16. That event made headlines both for Comey’s remarks and for Kenyon students’ tough but respectful questions during a Q&A session.

Kenyon students were invited to submit essays on the theme of the conference by Sept. 20. The author of one winning essay, George Goldman ’20, received a cash prize and the chance to attend a dinner with the conference participants.

View the “Free Speech, Civil Discourse” conference schedule, including links to livestreamed video of all events. Follow the discussion on Twitter using #KenyonCSAD. 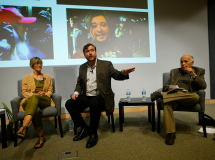 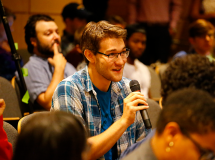 An audience member asks a question. 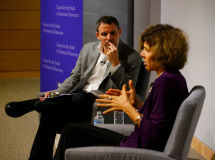 Guest speaker Steven Pinker of Harvard University asks a question of another panelist. 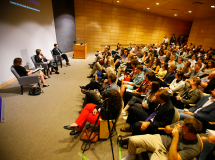 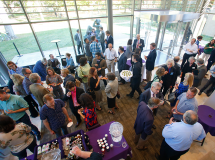 Students, faculty and guests mingle and converse during a reception. 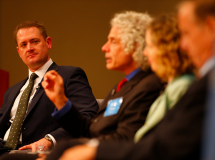 A student asks a question of CSAD's closing panelists. In a post on the blog “Lawfare,” scholar Benjamin Wittes praised the way Kenyon students interacted with FBI Director James B. Comey P’16 during his keynote speech at “The Expectation of Privacy: Encryption, Surveillance and Big Data” conference. Members of Kenyon’s faculty voted unanimously at an April 24 meeting to approve a statement affirming their commitment to freedom of expression for students and faculty.

RT @KenyonCollegian: Comey admits he puts a piece of tape over the webcam lens on his laptop #KenyonCSAD

RT @KenyonCollege: "The tension between civility & free speech will lead the way to progress." @sean_decatur's thoughts on #KenyonCSAD: htt…

"The tension between civility & free speech will lead the way to progress." @sean_decatur's thoughts on #KenyonCSAD… https://t.co/Ap0V43z60m

Did you miss #KenyonCSAD's conference on "Free Speech, Civil Discourse"? Get caught up and view our photo gallery:… https://t.co/yMbxLJBQEc

RT @glukianoff: Listening to Howard Dean defend Chaplinsky case as if it banned hate speech. It punished calling a cop a fascist #KenyonCSAD

RubensteinAdam - 4 years ago
Join our path forward.
Give To Kenyon
Loading