Watch each event at livestream.com

The most recent Center for the Study of American Democracy (CSAD) biennial conference took place September 27-28, 2017. Speakers representing diverse perspectives discussed an important and timely topic for both higher education and American politics.

The right to free and candid speech represents a critical element of liberal democracy and self-government. Political freedom requires that individuals be able to speak openly about controversial subjects, differences of opinion and the quality of government and governors. Liberal education likewise rests upon the ability to engage in civil discourse with some respect for unpopular perspectives.

Sustaining free government may presuppose certain qualities of its people, including the capacity for political discourse characterized by both deliberation and civility. Education and self-government may require a degree of tolerance and civility; a society that only yells at itself is not a deliberative democracy. At the same time, both education and democracy may produce discomfort and impoliteness. The process of recognizing the limits of one’s own knowledge or one’s political opinions may not be a pleasant experience. A free and democratic form of government likewise presupposes certain expectations that the governed may criticize their governors, those standing for public office and the policy views of others with whom they disagree.

American political discourse and the academic environment are too often characterized by incivility, disrespect, intolerance, even hate. Social media and new technologies contribute to both increased volume and flow of discourse, as well as speech that is more callous and less informed. As the conference title suggests, the imperatives of free society and polite society are sometimes in considerable tension. These tensions in turn contribute to competing results: restrictions on speech, a culture of political correctness, and desire for a safe space in which to express one’s opinions.

Institutions of higher education are spaces for imparting information, challenging assumptions and gaining knowledge. Can informal constraints intended to foster respect, such as self-censorship, also inhibit candor and participation? Does a culture that condemns micro-aggressions encourage respect and awareness, or does it chill speech? Do formal supports for the freedom of expression by some contribute to restrictions on others? What are the appropriate bounds of academic freedom and political expression for those with controversial or hateful views? Who decides what speech and speakers are preferred, what is excluded, and how?

Please stop by the college bookstore to purchase books from our speakers. 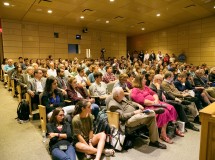 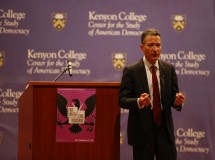 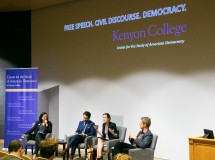 Shadi Hamid, Teresa Bejan, and Eugene Volokh kick off the conference with a panel moderated by Professor Nancy Powers. Guests and panelists get the chance to mingle during an afternoon reception. 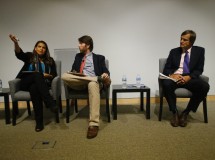 Stephanie Fryberg, Charles Cooke, and Ulrich Baer share their beliefs during the "Hate Speech and the Limits of Free Expression" panel. 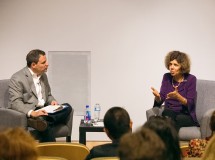 Nadine Strossen and Paul Singer share thoughts on "Is Free Speech the Enemy of Civil Society?" Laura Kipnis and Derald Wing Sue animatedly talk about "Is the Academy Too Politically Correct?"