On Saturday, May 18, musician, composer and all-around jazz legend Wynton Marsalis will address the Class of 2019 at Kenyon’s 191st Commencement. Before his arrival in Gambier, we talked to Marsalis about his career, the importance of music education, and how a life full of music can have a positive impact for individuals and communities.

You performed at Kenyon in 1991. What do you remember from that visit, and how do you feel about returning to Gambier to deliver this year’s Commencement address?

I’m honored to come back, and I remember being there because a good friend of mine graduated from Kenyon, Murray Horwitz [’70]. I don’t remember what set we played or anything like that, but of course I remember being at Kenyon and I remember the atmosphere and the environment. And because I heard so much about Kenyon from Murray, I was looking out for it, and I immensely enjoyed it; everybody was so nice, and it was very down home.

So I look forward to coming back, and I think Murray is going to be here again, so I look forward to it. I also know Mark Rosenthal [’73] and Barry Schwartz [’70], all Kenyon graduates, so they’re good friends of mine, and we’ve been talking about it for a while.

You’ve traveled the globe and performed with the best musicians from all over the world. But you’ve also devoted a lot of time to music education. Why have you made that an important part of your career?

I think the two go hand in hand. If you’re serious about music as a craft and an art, you’ve practiced a lot, you’ve studied a lot when you were coming up. You’re always in some type of educational environment, whether it’s formal or informal. And it’s really such a part of your upbringing that it’s natural. And my father is still a music educator and he’s a piano player, so it really is a part of life for me. I’ve been blessed to go to a lot of different places and teach and participate in educating students, and developing students’ lives, and for me it’s the fun part of music.

What have you learned from your many conversations with young people through your music education work? Are there any lessons you’ve taken from them and applied to your own life?

There are many things I’ve learned from students, and one that always stands out to me was a lesson that I learned early. I was critiquing a student — I was in my 20s, then, and this was a teenage student — and everything I said was negative. It was always, “play this better, do this,” and then after a while the student said, “Mr. Marsalis, could you teach me from a positive frame of reference?” And I think that’s affected my teaching more than anything. There’s always things you have to improve, but there are also many things that you’re doing well that need to be acknowledged. So to be able to construct a map of improvement through things that are done well is often times a much better method of teaching than just constant critique.

At Kenyon, we often talk about forming communities, and music is a great way to bring people together. How does music shape and maintain community?

There is music that is community activity, or music that deals with fundamental human things. Like any time we have a ceremony, there’s music: people go to church, there’s music; if you go to a graduation, there will be music, “Pomp and Circumstance” or whatever, or the school song. Christmas and seasons have music. Then there are other forms of music, which are used to divide communities. That’s when they’re commercial projects. This is for young people, this is for older people. So music can be something a community can rally around; it can also be something that separates community.

Many student musicians stop playing after high school or college. How would you encourage a graduating senior to keep music as part of their life even if they don’t go on to a professional career in the field?

It’s important to find some type of ensemble to play in, just keep up with songs, just keep your instrument out and play songs that you like. It could just be songs on the radio, songs that you like to play. It’s always important just to keep the touch, every day touch it, it doesn’t have to be but five or ten minutes. Music is so important, but many times in our country it seems like it’s just an activity for people in the school setting. You’ll find that there are other people like you who also want to be in an ensemble. Any time you can, form an ensemble.

Many people think of you as a jazz trumpet player, but during your career you’ve performed classical repertoire and also composed a lot of your own music. Why did you choose to develop such a wide-ranging career?

Jazz is such a broad thing, it has unbelievable range. So I was always interested in learning how to play it, and it required that you learn a lot about the music historically, it’s difficult to learn how to play. I grew up loving classical music, and I had the opportunity to play with orchestras. It was always a form of music that I loved, even though my daddy is a jazz musician, so I grew up in that tradition. My father also loved a lot of music, and he always encouraged me to play different music, even popular music. He was always saying, “play as much music as you can, and develop an understanding of what something is on the bandstand.”

And I think that I’ve had the opportunity to meet a lot of musicians from different genres and play with them. And all the things that I’m interested in music that I like, I try to learn about and participate in the history of those forms. But it’s very much personal, just the things that I like and that I’ve had the opportunity. Some I could play, some I couldn’t. Some things I still have to work on; it’s hard to learn how to really play other forms of music well if it’s not your cultural music. It’s hard to learn how to really play well, almost impossible to learn how to play a flamenco or some of these forms. I mean, I tried, but … [laughs]. 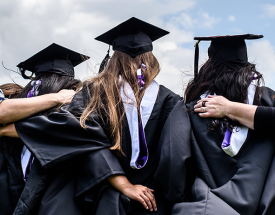 Professor of Mathematics Judy Holdener will focus on the theme of truth in her Baccalaureate address to the graduating Class of 2019.

Read more about Professor Holdener.
Join our path forward.
Give To Kenyon
Loading