When Professor of Mathematics Judy Holdener stands before seniors at 1:30 p.m. Friday, May 17, she won’t be there to lecture about number theory or the finer points of linear algebra. Rather, she will share a few words of advice with graduating members of the Class of 2019 at this year’s Baccalaureate ceremony, held on Samuel Mather lawn.

“I have a great deal of respect for the Class of 2019, so I am incredibly honored that they have chosen me to be their speaker. Academically, I find them to be among the best I’ve seen in my 22 years at Kenyon. They are rigorous thinkers, and they have been willing to take risks both in and out of the classroom,” she said. “I’m most struck, however, by the healthy collaborations I have seen from this class. They have worked together in positive and meaningful ways, challenging and inspiring one another. Our seniors have grown so much in their four years on this Hill, and I am very proud of their accomplishments.”

The Baccalaureate ceremony was historically commemorated as a worship service in which a sermon was preached to the graduating class. In recent years, the College has expanded the ceremony to highlight Kenyon’s academic mission and make the occasion accessible to the broader College community. It now includes readings of academic and spiritual texts chosen by several seniors to represent diverse faiths and communities. In place of a sermon, an address is also given by a representative of the College who is selected by a vote of the graduating class.

Elvin Shrestha ’19, a math major from Kathmandu, Nepal, distinctly remembers when his longtime professor and advisor was announced as this year’s speaker; he was with Holdener and surrounded by other senior math majors who all burst out in celebration when they heard the news.

“Professor Holdener is a treasure at Kenyon,” he said. “She has impacted my personal and academic growth probably more than she knows. I definitely credit my confidence to her uncompromising belief in me. Her guidance and encouragement is certainly one of the reasons I have chosen to pursue an academic career in mathematics and hope to make an impact on students’ lives like she has made on mine.”

Caroline Daugherty ’19, a math and economics double major from Atlanta, also highlighted Holdener’s passion for math as an important part of her teaching. She recounted a time when Holdener designed an elaborate scavenger hunt, sending students all over campus to find clues and decode messages using decryption techniques they had learned during their number theory class.

“She is incredibly enthusiastic inside and outside the classroom, and she inspires a similar passion in her students. Simply put, she loves math and wants to show everyone its beauty,” Daugherty said. “This is just one example of how Professor Holdener puts in extra effort in designing her lectures and coursework so that they are interactive and engaging for students. I’m really looking forward to hearing her speak at Baccalaureate, and believe that the charisma and intellect she brings to any room will leave the Class of 2019 with insightful thoughts to ponder as its time on the Hill comes to a close.”

To preview her speech without giving too much away, Holdener said that the main theme of her speech will be truth, a central notion in mathematics that is also critical for a stable society. “I am drawn to this topic because of the political climate, of course, but the Class of 2019 brings me much hope. They have the ability to create greater stability in this world,” she said. 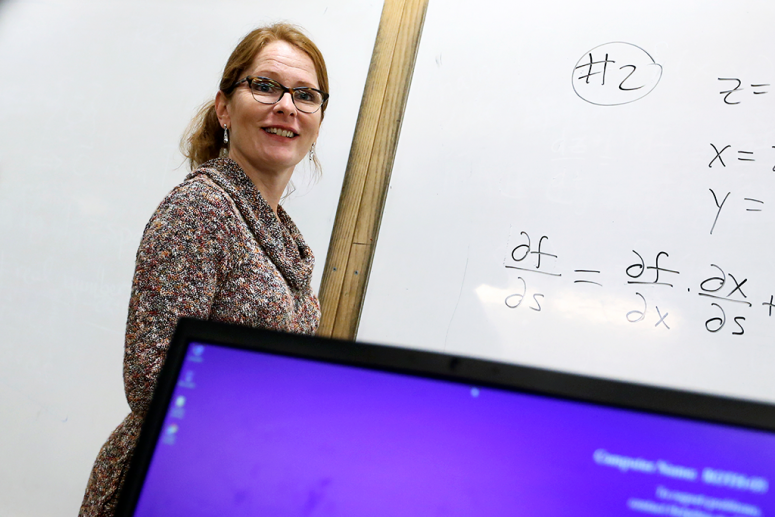 In addition to the Baccalaureate ceremony, the Class of 2019 will be celebrated with many events the weekend of May 17-18. This year’s Commencement speaker discusses music education and his career as a jazz legend.

Read the interview.
Join our path forward.
Give To Kenyon
Loading