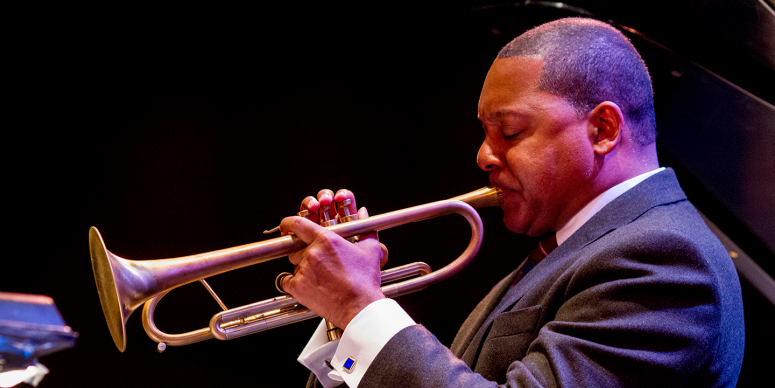 Internationally acclaimed musician and educator Wynton Marsalis, winner of nine Grammy Awards and the first jazz musician to win the Pulitzer Prize for Music, will be the featured speaker at Kenyon’s 191st Commencement on May 18, 2019.

Marsalis was nominated by a committee of faculty, staff and students. President Sean Decatur extended the invitation from the College to deliver the address.

Through his prolific touring, recording of albums, and advocacy of the arts, Marsalis inspired generations to explore the genre of jazz and embrace the role of the arts in America’s culture. In 1987, Marsalis co-founded Jazz at Lincoln Center, enlivening and expanding a global community for jazz. His work as a cultural ambassador continued with the creation of the 1995 PBS television program “Marsalis on Music,” as well as an NPR series that same year titled “Making the Music,” which he created with public radio legend Murray Horwitz ’70 H’92. Both of these broadcast series won the prestigious George Foster Peabody Award.

“For decades, Wynton Marsalis has demonstrated not only incredible musical talent, but also an impressive commitment to promoting the arts and cultural literacy in America,” Decatur said. “Mr. Marsalis has opened doors for generations to share in his passion for music, and he serves as an excellent model for how engagement with the arts can lead to a fuller, richer life. I am elated to welcome him to campus in May to address the Class of 2019.”

Born in New Orleans in 1961 and named for jazz pianist Wynton Kelly, Marsalis was raised in a family of musicians. At age 14 he performed with the New Orleans Philharmonic, and at age 17, he became the youngest musician ever to be admitted to Tanglewood’s Berkshire Music Center. He went on to attend the Juilliard School in New York City and played with famed jazz musician Art Blakey before forming his own band in 1981.

Throughout his long musical career, Marsalis has produced more than 80 records, which have sold more than seven million copies worldwide, and has toured on six continents. In 1983, at age 22, he won his first Grammy Awards, becoming the only artist ever to win for both jazz and classical records in the same year — repeating the feat in 1984. In 1997, his oratorio “Blood on the Fields” won the Pulitzer Prize for Music.

“Wynton Marsalis’s advocacy for jazz and its rich history is unmatched, and there is no greater practitioner of or ambassador for jazz in America today,” said Professor of Music Ted Buehrer ’91, who recalls a 1991 Rosse Hall performance by Marsalis and his septet as a high point of his Kenyon experience. “As a jazz trumpet player myself, I grew up in the 1980s as Marsalis took the musical world by storm, and marveled at his dazzling musicianship.”

Marsalis was honored with the National Medal of Arts in 2005 and the National Humanities Medal in 2015. In the fall of 2009, Marsalis received one of France’s highest distinctions, the insignia Chevalier of the Legion of Honor, for his extraordinary contributions to American culture.

“Wynton Marsalis has upheld an immense appreciation for the arts and a deep commitment to cultural education — both of which are important to a liberal arts education,” said Senior Class President Sriya Chadalavada, an economics major from Cincinnati, who will introduce Marsalis at Commencement. “The Class of 2019 will benefit from hearing his perspective on how the arts and the liberal arts fit into our world after Kenyon.”

In addition to his expansive body of musical compositions, Marsalis has authored six books that explore the world of jazz music, including most recently “Squeak, Rumble, Whomp! Whomp! Whomp!”, a sonic adventure for children. Marsalis also has served as a cultural correspondent for “CBS This Morning” and as A.D. White Professor-at-Large at Cornell University. Honorary degrees have been conferred upon Marsalis by more than 30 colleges and universities; he will receive one more during Kenyon’s Commencement, when the College will award him an honorary doctorate of music.