“Kenyon teaches you a lot of things you don’t realize that you’re learning while you’re learning them: how to collaborate, how to think innovatively and analyze things, how to become a member of a community,” said Masen Colucci ’19. “Maybe it’s magic.”

Colucci, a film major and English minor, applied that magic in his summer internship at New York Magazine this summer. The publication invited Colucci back for a second stint shooting and editing videos in New York City.

“I arrived at my internship during a pivotal time last summer. The entire video department had just restructured and was moving in a new direction, which gave me the opportunity to step up and take on more responsibility than interns typically do,” Colucci said. I’m thankful that I had the chance to challenge myself and prove I could handle tasks on my own and be trusted as a member of the team.”

Colucci also applied the technical skills he’s learned in Kenyon’s film department, which offers state-of-the-art facilities like editing suites and a fully equipped sound stage. He particularly appreciated a “Basic Cinematography” course he took with visiting professor Will Adashek ’05, a lighting designer, cinematographer and producer based in Los Angeles.

“The skills I learned during that class, in terms of navigating different camera, shooting and lighting techniques and different programs, were invaluable,” Colucci said. “I took what I learned in my courses at Kenyon, added that to what I’ve learned from my coworkers, and put it into practice.”

In addition to shooting and editing videos, and working as a production assistant, Colucci also was able to pitch story ideas directly to magazine staffers. “My internship helped me realize that storytelling, whether it be through narrative film or digital media, is something that I want to pursue professionally,” he said.

Although arriving in a professional office at the bottom of the corporate ladder can be intimidating, “your coworkers and supervisors don’t expect you to know everything — you’re an intern for a reason,” Colucci said. “The best you can do is work hard, show initiative and be curious about learning new skills and developing the ones you have so you can be a productive member of the team.”

Read about what other Kenyon students did during their summer internships. 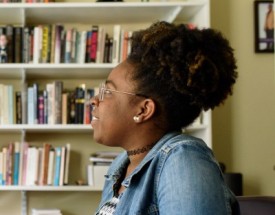 Inspired by her internship and Kenyon experience, Jasmine Wilson ’19 imagines a future in education.

Read more about Jasmine Wilson.
Join our path forward.
Give To Kenyon
Loading