When Joan Slonczewski, the Robert A. Oden Jr. Professor of Biology, visited Antarctica to study microbes in frozen-over lakes, she gathered clumps of plant-based material littering the surface to test for live bacteria, hoping to find some used for antibiotics.

Now, through a competitive program, the Joint Genome Institute at the Department of Energy has accepted her samples for genetic mapping that will help identify organisms in the mats of material, which floated from the lake bottom and survived the continent’s deep freezes.

“Whole ecosystems live in these mats,” she said in a recent presentation on campus about her fall 2014 trip, which was funded largely by her Oden professorship.

When student researchers and staff in her Kenyon biology lab incubated samples at about 50 degrees, the material quickly greened up and produced oxygen bubbles. They saw invertebrate worms moving. “This stuff just starts up again growing after all the cold storage,” she said.

Specifically, Slonczewski would like to find bacteria called actinomycetes, which she hopes could be used for new kinds of antibiotics. “It would be very interesting if we found actinomycetes because we might come up with novel antibiotic-producing genes,” she said.

Experts who reviewed the genetic-sequencing proposal for the Joint Genome Institute noted that undergraduates would get the chance to help. “The project would heavily involve undergraduates in metagenomic analysis, which is unusual,” one reviewer said. “Slonczewski is known for being an incredible undergraduate research mentor.”

Going to the end of the earth to study microbes is worthwhile because there is unexpected diversity and “unusual living forms that you could not imagine” in underground rivers beneath the mountains that feed the lakes, along with summer glacial melt, Slonczewski said. While similar bacteria can be found in local ponds and Lake Erie, the Antarctic ones differ somewhat because they have to survive sustained subzero temperatures.

Slonczewski’s team is finishing prep of DNA samples to send to the government mapping facility, and she expects results within a few months. The findings will be public property as a government grant project, and researchers could use the information to develop patents.

One reviewer for the Joint Genome Institute noted that astrobiologists would like to see the results because the cold desert conditions in Antarctica could mimic conditions on Mars. The project also would interest people studying cold tolerance, photosynthesis, organisms in extreme environments and long-term survival. And one type of cold-weather microbe is used to produce enzymes for cleaning products, Slonczewski said.

In Antarctica, she worked with Miami University Associate Professor of Biology Rachael Morgan-Kiss under her National Science Foundation grant to take lake water samples, which also will be included in the genetic mapping.

Slonczewski helped crank the winch for vessels to collect water below the ice, but she said she was more interested in the clumps on the surface, called liftoff mats because they broke from the thick living material below and became trapped in the icy layer for about a decade before surfacing through melting and wind erosion.

Slonczewski took four flights, including a final eight-hour military transport from New Zealand, to reach the NSF research station. A helicopter took her group to the lake valley, where team members slept one to a tent and student workers gathered ice chunks from the looming glacier each day for their water supply.

“I had never camped before a day in my life, so it was a steep learning curve to start by camping in Antarctica where it’s 20 below at night.” 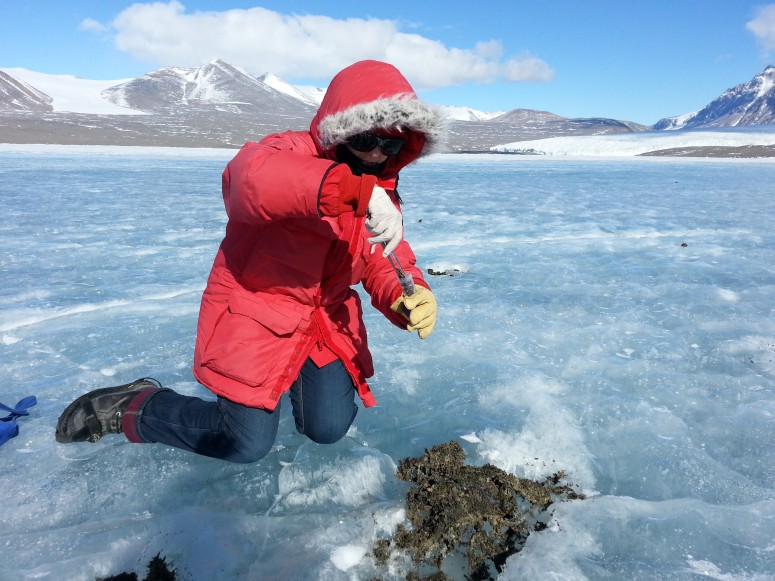