For five weeks, Joan Slonczewski, the Robert A. Oden Jr. Professor of Biology, explored a land far from Gambier: Antarctica.

With help from the Oden professorship, Slonczewski headed to Antarctica in November to research how algae and protists (a diverse group of one-celled organisms) impact and are impacted by climate change. Slonczewski chronicled her preparation for and time in Antarctica in her blog.

Slonczewski traveled to Antarctica with a small team of scientists, including her host researcher, Rachael Morgan-Kiss, an associate professor at the Miami University Department of Microbiology.

“She wrote a grant for another expedition, which, if funded, would enable a Kenyon student to go the following year,” Slonczewski said. “I’m hoping that this travel to Antarctica will end up generating opportunities for Kenyon students to also experience Antarctica.”

Traveling to Antarctica was an adventure in itself. “It’s actually quite challenging to get to go to Antarctica, because the continent is subject to international regulation,” said Slonczewski, who had to seek approval from the National Science Foundation. Slonczewski also had to undergo training for a week in New Zealand before landing in Antarctica — a place she describes as “perhaps the nearest thing to another planet that we would find on Earth.”

“Your National Geographic view of Antarctica is the pristine, endless icy expanse,” she wrote. “What it takes to get there, however, is eight hours in the cargo hold of an Air Force prop plane. Barely heated. No restroom — just a cardboard box.”

To read about Slonczewski’s adventures in Antarctica, visit her blog at ultraphyte.com. 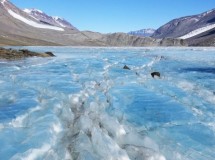 Joan Slonczewski and her team are studying protists in frozen Lake Bonney. 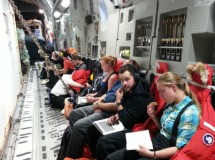 The interior of a C-17, a military transport aircraft used to fly visitors to Antarctica. Slonczewski shows her Kenyon pride before taking a helicopter to the research camp in the Dry Valleys region. 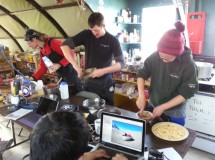 Researchers cook and eat together in the Jamesway, a version of a hut designed for arctic weather. To get drinking water, the researchers saw chunks of ice from a glacier, thaw it on a wood stove, and filter it. The view from the air of an Antarctic mountain range. 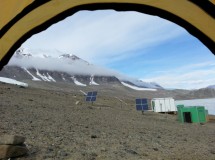 The view from Slonczewski's tent. A snowstorm hits on the horizon. A rock the size of a car rests on ice. The drill bit Slonczewski's team used to break through to the bottom of the ice. 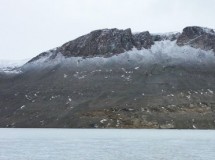 Snow starts to cover a mountain.