Billions of years ago, the Big Bang flung open the universe, evolving it into the intergalactic system we know today, complete with planets, stars and all manners of matter.

But in order for the Big Bang to occur, the universe needed to reach thermal equilibrium, and the process of achieving this equilibrium has mystified scientists for decades — until now.

Rachel Nguyen ’19 and Associate Professor of Physics Tom Giblin teamed with physicists from the Massachusetts Institute of Technology and the Netherlands’ Leiden University on a study that illuminates how the universe reached the thermal state necessary for the Big Bang to occur. Their findings were published in Physical Review Letters, a top physics journal (and a prestigious placement for an undergraduate researcher).

Using software developed at Kenyon, Nguyen, Giblin and their co-authors carefully constructed and tested a model that illustrates how this reheating might have occurred. Using a lattice model, they mapped how the energy of multiple forms of matter might change and interact with gravity in the period after cosmic inflation. Their tested and proven model provides a more complete story of how cosmic inflation occurred — and, crucially, how it ended.

“Solving the problem of where inflation comes from and how the universe reheats has been something the physics community has confronted for nearly 40 years,” Giblin said. “For the most part, popular models get ruled out. Our particular model demonstrates this complex system, and it shows how you can get a hot universe where energy is efficiently taken out of the inflationary field and particles are created.”

Much of the responsibility for testing the model rested with Nguyen, who used precision computing skills honed in Giblin’s lab to develop the lattice simulations. She conducted her work through the Clare Boothe Luce Undergraduate Research Program, which helps women majoring in physics, chemistry or mathematics at Kenyon develop their academic careers. The Kenyon program, supported by a $176,000 grant from the Henry Luce Foundation as well as College funds, provides students with opportunities for rigorous mentorship, collaborative research projects and career guidance.

As part of the program, Giblin arranged a visit with Nguyen to MIT so she could connect with their co-authors in person.

“Going into the trip, I didn’t expect to understand most of what was going on,” Nguyen said. “But I did, and I was actively collaborating with our co-authors, doing meaningful work. It was really eye-opening for me.”

“That visit showed her that she was talking about the project at the same level of sophistication as a tenured MIT professor. It was important for her to know that she’s not just somebody who helps. She’s a central figure in the work,” Giblin said.

Now a doctoral student at the University of Illinois, Nguyen has shifted her research focus to dark matter detection — though she still has a study in the works with Giblin on cosmic inflation and reheating.

Giblin and Nguyen’s co-authors include Jorinde van de Vis and Evangelos Sfakianakis of Leiden University and David Kaiser of MIT. Support for their work was provided by the Clare Boothe Luce Undergraduate Research Program, the National Science Foundation, the U.S. Department of Energy and the Netherlands Organisation for Scientific Research. 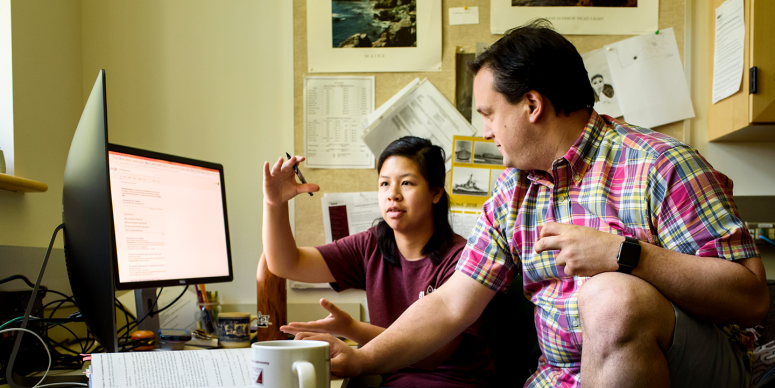 A grant from the Henry Luce Foundation will fund 22 Kenyon students to pursue year-long research projects with faculty mentors.