The program is intended to encourage women to enter, study, graduate and teach in the fields of science, mathematics and engineering. To be eligible, students must major in chemistry, physics or mathematics and propose a research project during the application process.

“The grant recognizes the strength of our program in the sciences and our solid core of female faculty members willing to take the lead in our effort to recruit women into the sciences and provide mentorship to them,” Provost Joseph L. Klesner said.

Stipends from the grant will pay for the following: a project to be pursued full-time in the summer and part-time during the following school year, travel to professional conferences, supplies and equipment, and public presentations of the work.

The Clare Boothe Luce Research Scholars also will participate in regular campus-wide discussion groups, build relationships with peers and partner with a faculty mentor on their research.

“Our students are going to be immersed in trying to understand the unknown. They are going to have to figure out things that other people have not figured out,” said Professor of Mathematics Judy Holdener, a participant in the faculty group that developed the grant application. “That is a genuine research experience. Most of our coursework typically covers known material.”

This is the first time Kenyon has received an award from the Clare Boothe Luce Program, although it has received other grants from the Luce Foundation. “Our proposal was fully funded, which reflects the confidence the Clare Boothe Luce Program selection committee and the Luce Foundation has in Kenyon to recruit talented women and inspire them to pursue careers in the sciences,” Holdener said.

Clare Boothe Luce was a playwright, journalist, U.S. ambassador to Italy and the first woman elected to Congress from Connecticut. She was married to Henry R. Luce, co-founder and editor-in-chief of Time Inc. Professor of Mathematics Judy Holdener in the classroom. 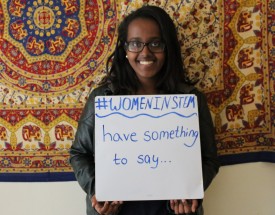 In a post for "Her Campus," Kalki Aseged '17 asked 42 female classmates and professors to comment on their experiences as women studying and working in a STEM field.

More about women in STEM.
Join our path forward.
Give To Kenyon
Loading