On a summer day in Kenyon’s Tomsich Hall, Margo Goldfarb ’20 was chasing down information on an enzyme related to the vitamin B5 biosynthetic pathway. Her quest was crucial to her research project with Associate Professor of Chemistry Kerry Rouhier, exploring how plants synthesize the amino acid beta-alanine — but she quickly hit a roadblock.

“I’m searching on all the databases, and I finally found what I was looking for. I go to search for the literature that’s out there on this topic to try to educate myself — and there are only two papers on it,” said Goldfarb, a chemistry major from Franklin, Tennessee. “What was completely eye-opening to me was to see the holes in our knowledge and realize that I am doing something, and the [Rouhier] lab collectively is trying to address something, that people don’t know anything about. You’re told that will happen in your studies, but to be able to experience that firsthand is an entirely different feeling.”

Goldfarb’s research with Rouhier is conducted through the Clare Boothe Luce Undergraduate Research Program, which helps women majoring in chemistry, physics or mathematics at Kenyon develop their academic careers. The Kenyon program, supported by a $176,000 grant from the Henry Luce Foundation as well as College funds, provides students with opportunities for rigorous mentorship, collaborative research projects and career guidance. A goal of the grant is to boost the number of women studying the physical sciences at Kenyon; over the past five years, 39 percent of physical science majors at Kenyon have been women, but women make up about 55 percent of the overall student body.

“Through the Clare Boothe Luce program, we’re thinking about the mentorship aspect of a science education much more deeply and extensively as a way to change some of the outcomes related to engaging students in research,” said Rouhier, who is serving as the director of the program in its inaugural year. “When you’re in the minority in a particular discipline, it can feel like you’re imposing on whatever social norms already exist. With this mentoring process, we are working on building the confidence of our students so they are ready to go, to take ownership of their projects and to take on leadership roles.”

The three-year grant ultimately will fund up to 22 student-faculty research teams. This year, six students and their faculty mentors were accepted to the program, which grants each student scholar a $7,000 stipend to conduct research through the spring, summer and fall, as well as class credit for their research. Each team also receives $1,000 for support materials and travel needed for their project. Throughout the yearlong program, students also participate in monthly seminars where they learn about graduate school admissions processes, develop their scientific writing skills and give presentations on their research.

Rachel Nguyen ’19, a physics major from New Orleans, was encouraged to apply for the program by her advisor, Associate Professor of Physics Tom Giblin. Together, they are researching the evolution of the universe and the formation of primordial black holes. Giblin has helped Nguyen network with his fellow cosmologists at other institutions, as well as with his previous Kenyon students who have continued on to graduate school. “He has been integrating us with some of his other colleagues, and we’ve started to collaborate with them more. It’s nice. It makes you feel like you’re doing the big stuff, the real research, and you’re actually interacting like a professor with other professors,” Nguyen said.

Goldfarb similarly credits the program with helping her develop her independent research skills. “It’s much more of a collaboration rather than you just being directed by your professor,” Goldfarb said. “When Professor Rouhier and I discuss future experiments or where to go next, we’re on equal footing, and it’s very much a discussion.”

The Clare Boothe Luce Undergraduate Research Program builds on Kenyon’s efforts to help underrepresented students in the sciences persist and succeed in their disciplines. In 2016, the National Science Foundation awarded Kenyon a grant of nearly $1 million to study how high-impact practices, such as internships and research, can help STEM students achieve career success. In 2017, Kenyon was selected as one of 24 schools nationwide, and one of just two liberal arts colleges, to participate in the Howard Hughes Medical Institute (HHMI) Inclusive Excellence Initiative, aimed at helping schools break down institutional barriers to inclusion of students underrepresented in science education. Schools selected to participate in the HHMI initiative received a $1 million grant, supplied over a five-year period.

The Clare Boothe Luce program, which is open to sophomores and juniors, will fund eight more student-faculty research teams next year. For more information and instructions on the application process, visit the program website. 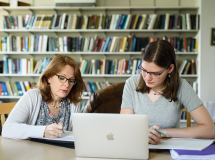 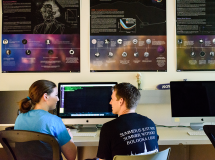