When Alexander Nethercutt ’16 was asked by his internship manager at Yelp for recommendations for future employees, he knew exactly whom to suggest — his classmate Max Siegrist ’16.

Thanks to his connection with Nethercutt, Siegrist, an economics major and basketball player, is set to start working in Chicago as an account executive for Yelp.

“I always have been interested in sales and marketing because I really like talking to people.  I’m excited about what is in store for me because each day working there will be different,” Siegrist said of the San Francisco-based company that publishes reviews about local businesses.

Siegrist joins Nethercutt, who also landed a job with Yelp, and about 100 other 2016 graduates who, as of mid-May, reported post-graduate employment, graduate school or service commitment to groups such as the Peace Corps and Teach for America.

Karina Cruz ’16, an American studies major and dance minor, will work as a development associate for Dress for Success Worldwide, a non-profit organization that helps women become self-sufficient by providing a network of support and professional attire. Cruz’s job focuses on fundraising and event planning in the organization’s New York City operation, which spans three sites and includes more than 200 partner agencies that refer clients to Dress for Success.

“I really wanted to work in an organization focused on women’s issues,” Cruz said. “I like fashion but don’t like the industry. This puts everything together in one place: It incorporates all of my fashion background, from classes at Kenyon and summer internships, and helps people along the way.”

Connecting with alumni through the Career Development Office eased Cruz’s anxiety about job hunting. “There is no direct path after we graduate,” she said. “Talking to older alumni helped calm me down and keep me focused.”

Natalie Plick ’16, a neuroscience major, will see a familiar face when she arrives in Baltimore later this year to begin research at the National Institute of Aging (NIA). Working in the same laboratory will be former Kenyon Neuroscience Club colleague Stephanie Cordonnier ’15.

“Kenyon does a great job sending graduates out into the research world,” Plick said. “We usually have someone go off to NIA every year.”

Plick is a recipient of a Postbaccalaureate Intramural Research Training Award from the National Institutes of Health. The postbaccalaureate program helps recent college grads explore careers in research and health care in preparation for graduate or professional school. Plick’s research will focus on the effects of energy restriction on aging and neurodegenerative diseases such as Alzheimer’s, dementia, Parkinson’s and ALS.

Kenyon students excel in research fields because they are afforded the opportunity to work on projects throughout their undergraduate years, Plick said. “The research experience at Kenyon is huge. I worked for more than two years in (Professor of Biology) Wade Powell’s molecular development laboratory, learning a lot of techniques that will definitely translate to NIA.”

Here is where other members of the Class of 2016 are headed. 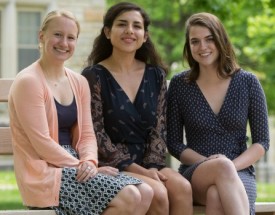 Read more about Manjul.
Join our path forward.
Give To Kenyon
Loading