Growing up in Chicago, Patricia Mota ’16 watched her mother, a native of Mexico, struggle to learn English. The international studies and fluent Spanish major learned from an early age the power that language held.

“Knowing a second language is a privilege,” Mota said. “Aside from the convenience for everyday life, bilingualism gives you the freedom to vocalize that which previously had been inexpressible, allowing us to befriend those we would not have known otherwise.”

Mota’s experience helped propel her on a mission of bilingualism that she is taking to Mexico this summer as one of Kenyon’s four J. William Fulbright Fellowship winners. Recipients of the coveted fellowship receive grants to teach English or conduct research abroad. Each of this year’s fellows will follow the teaching track.

In addition to teaching English in Mexico, Mota hopes to lead a photography workshop documenting everyday life as an extension of “Latinos in Rural America.”

Mary Sturgis ’16, an international studies and modern languages and literature double major from Shreveport, Louisiana, will join Mota as a Fulbright fellow in Latin America. Sturgis is headed to Argentina to help future English teachers learn the language — a task that will put to use skills she picked up in her three years as an apprentice teacher at Kenyon.

“For teachers that may never have had the opportunity to learn firsthand about American culture, my ability to incorporate culture in the classroom will be really valuable,” Sturgis said.

Sturgis fell in love with Argentina through a course taught by Professor of Spanish Marta Sierra, “The Literature of National Experience in Argentina.” Her fascination with the country’s “dirty war” inspired her honors thesis, which focused on the role that young people played in the conflict. Sturgis, who studied abroad in France her junior year, felt compelled to travel to Argentina as a Fulbright fellow to gain personal experience in the country she had researched so extensively from Gambier.

“I knew that I wanted to go there and live it not just through academia but through relationships and friendships,” she said.

Another Fulbright fellow, Haley Townsend ’16 of Greenwood, Indiana, departs at the end of August for Turkey, where she will continue her interest in the Middle East. Her fascination with the region began in 2008 when her father, a colonel in the Indiana National Guard, was deployed to Iraq and Kuwait.

“I’m excited about going there,” said Townsend, an international studies major with a minor in Arabic. “Turkey lies among three continents and has an unusual history. I taught English in Morocco during the first semester of my junior year, and that was a life-changing experience. I expect this to be the same.”

An All-American swimmer at Kenyon, Townsend eyes a future that may include teaching, graduate school or work in the energy field. She hopes her year in Turkey will help her decide on a career path.

Like Townsend, Fulbright winner Rosa Carnevali-Doan ’16 had an eye-opening experience during a semester abroad. The sociology major and studio art minor from Washington, D.C., participated in a program in Prague after a course taught by Assistant Professor of Sociology Celso Villegas sparked her interest in Central Europe.

“I learned a lot about Czech history, became engaged in the culture and wanted to see more of the region,” she said.

Carnevali-Doan will be based in Slovakia for her Fulbright and also hopes to work on health and child care issues among Slovak women.

Kenyon has been a national leader in producing Fulbrights. In addition to the four finalists this year, three students were designated as alternates: Tehya Boswell ’16 (Dominican Republic), Eliza Fairbrother ’16 (Morocco) and Sruthi Rao ’16 (Turkey).

“Alternates belong to a relatively small group, so it’s still quite an honor,” said Thomas Hawks, assistant professor of English, who directs Kenyon’s Office of National Fellowships and Scholarships.

Kenyon faculty and staff members recruit Fulbright scholars and help them succeed with support services that range from drafting applications to practicing interviews.

“These scholarships are really fantastic for students in terms of giving them a leg up on their careers and providing an experience that’s useful down the road, helping them to see more of the world and think about the opportunities that may be out there from them,” Hawks said.

Note: Due to security concerns in the wake of political unrest in Turkey, the Department of State canceled the English Teaching Assistant program that Haley Townsend '16 was expected to participate in. 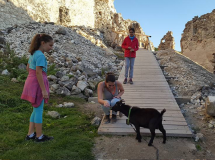 Rosa Carnevali-Doan ’16 (center) center with a student (back) and her sister visiting Uhrovec Castle, 20 minutes from town. Rosa Carnevali-Doan ’16 with students, the youngest class in the school. 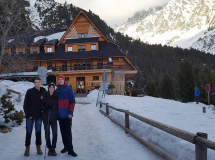 Rosa Carnevali-Doan ’16 with students after a difficult hike to Popradske Pleso in the High Tatras during a school ski trip. 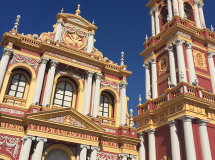 Photo taken by Mary Sturgis ’16, who is in Argentina helping future English teachers learn the language. 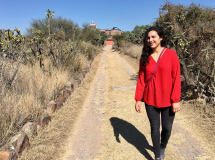 Photo by Patricia Mota ’16, who is teaching English in Mexico.