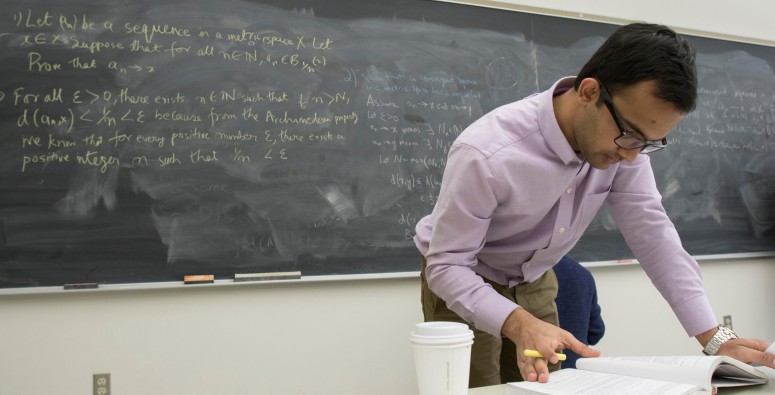 Manjul Bhusal Sharma ’16 approached his senior year with an ambitious goal: to land a job that would launch his career in independent investment research. With a post-graduate position lined up at the Chicago-based financial consulting firm Morningstar, he is well on his way.

The economics and mathematics double major had set his sights on the firm because of how well it matched his career aspirations.

“A lot of things depend on wise investments,” said the Kathmandu, Nepal, native, citing retirement and education as two examples.

Bhusal Sharma joins many other seniors who already have secured employment in fields such as insurance, real estate, banking and sales. According to Scott Layson, director of the Career Development Office, these early job offers aren’t unusual, especially among the banking, finance, education and service industries, which recruit workers early in the hiring season.

Bhusal Sharma learned about the opportunity with Morningstar, which has a history of hiring Kenyon graduates, through the Career Development Office. With the office’s help, he refined his resume and interview skills and reached out to alumni in the finance industry.

“Manjul is a go-getter,” Layson said of Bhusal Sharma, who stays busy as an admissions fellow, a student manager at the Kenyon Athletic Center, a member of Delta Tau Delta fraternity and a member of Alumni Leaders of Tomorrow. “He identified the employer he wanted and did his networking.”

Of course, being an excellent student helps, too.

“He’s a very strong student, very diligent,” said Jaret Treber, associate professor of economics. Treber was so impressed with Bhusal Sharma’s work in his sports economics class last semester, he enlisted his help with a paper on labor stoppages in the NHL.

Treber isn’t surprised at the success of economics majors in finding jobs early. “In the liberal arts, we intentionally aren’t preprofessional,” he said. “Economics teaches students to answer analytically. They leave well prepared with a nice skill set.”

Layson said that employers are looking for smart people to hire, not those only proficient in certain skills. “You can teach a smart person anything,” he said.

He also stresses that seniors have plenty of time to find jobs and that recruiters will be active on campus this semester. “The majority of students secure their jobs the first six months after graduation.”

Here is a look at where other members of the Class of 2016 are headed.