On Jan. 19, a Kenyon class met for the first time in a former food warehouse that has been transformed into a state-of-the-art film center and community hub.

As construction work continued on the first floor of the Wright Center, formerly known as the Buckeye Candy building, 16 students gathered for a class that heralded a new era of collaboration between Kenyon and the Knox County community.

Jonathan Sherman, associate professor of film, taught his course “The Screenwriter” in a second-floor classroom with a 75-inch screen and windows overlooking a sweeping view of the Kokosing River as it runs through downtown Mount Vernon.

“This is an exponential improvement,” said A.J. Reid ’19, a film major from North Bay Village, Florida. “It’s nice to have an actual base for our work. It makes the film major much more concrete.” Kenyon introduced the film major in 2011.

Sherman took the students on a tour of the 1910 building at the start of the class. The spaces include a room devoted to demonstrating editing techniques, a 30-seat screening room and a secure room to store the College’s film equipment.

“I picked the right time to come to Kenyon!” said Jesseca Kusher ’19, a film and biology double major from Spartanburg, South Carolina. She marveled at the individualized and carefully sound-proofed editing rooms available to students.

The $6 million effort to save and restore the warehouse at 400 S. Main Street places Kenyon in an education corridor that includes Mount Vernon Nazarene University and Central Ohio Technical College.

The building is named for the children of the philanthropist who has revitalized a host of Mount Vernon landmarks. Karen Buchwald Wright P’05 ’09 is chairman, president and CEO of Ariel Corporation, a leading manufacturer of compressors used in the natural gas industry. Her sons who attended Kenyon are Alexander Wright ’05, married to Libby Wright ’05, and Hunter Wright ’09, married to Katherine Wright ’10. Alexander Wright is a member of the Kenyon College Board of Trustees.

The Ariel Foundation helped Kenyon acquire the warehouse in 2015, with additional support from the Community Foundation of Mount Vernon & Knox County and gifts by private donors.

Renovation work began in March. The roof was replaced to allow for a two-story film studio in the center of the 18,000-square-foot building, and work continues on the first-floor space that will be occupied by SPI, a science-play initiative for children. Workers removed bricks and placed glass in the arches on the building’s south facade to let natural light into SPI’s reading nook, climbing structure and small theater for science demonstrations.

The Wright Center also houses the Office for Community Partnerships at Kenyon, directed by Jen Odenweller. Members of the office moved into their new space a few days before the first film class was held.

In Sherman’s course, students write weekly as they examine the form and structure of three-act feature films, working toward a complete 120-page screenplay by semester’s end. In his first class at the Wright Center, Sherman easily projected the animated film “Ratatouille” from his laptop to the large screen and paused it frequently to describe its storytelling structure.

Sherman said, “This feels like the right moment for Kenyon to be more involved in the community. I could see people, after a class finishes, going up the street and having lunch or getting coffee or going shopping in Mount Vernon.”

Wright Center Named: The former Buckeye Candy building will house a film studio and the Office for Community Partnerships.

Photos of the Wright Center 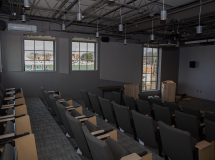 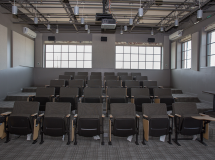