A Kenyon research team is seeking ways to reduce the harmful effects of potentially toxin-producing agricultural runoff that is contaminating some water supplies and closing beaches throughout the U.S.

“Nitrogen fertilizers that leave the field are making a complete mess of the environment,” said Professor of Biology Siobhan Fennessy, who is co-director of Kenyon’s environmental studies program and a leading expert on wetland ecosystems. She cited the “dead zone” in the Gulf of Mexico and the poisoning of the Toledo, Ohio, water supply as recent examples of excessive nutrient pollution.

Fennessy is working with Heather Pacheco ’18 of Santa Fe, New Mexico, and Srila Chadalavada ’20 of Cincinnati to study water and soil samples collected from replicated experimental wetlands at nearby Buckeye Lake. Their goal is to determine the role that wetland restoration can play in capturing nitrogen and phosphorous from farm fertilizers. Working with colleagues from Florida Gulf Coast University, the Kenyon team plans to test recycling these nutrients back in the fields to reduce the use of new fertilizers.

Chadalavada brought back samples to Fennessy’s lab to examine wetland microbiology. “I have been looking at what these microbes do and how they help wetlands as a whole,” said Chadalavada, who has not yet declared a major but is interested in molecular biology. “By looking at their diversity, the microbial communities tell us how well wetlands are coming along.”

Pacheco, a biology and environmental studies major, investigated the process of denitrification, the ability of restored wetlands to improve water quality through nitrogen removal. “This is work that directly affects humans, plants, animals, water and everything else — right now,” Pacheco said. “I never felt like we were doing an experiment for the sake of doing an experiment. Professor Fennessy does a great job of conceptualizing research.”

Fennessy praised the critical role the students played in the research, which began in the Summer Scholars program. The students especially enjoyed the combination of field and lab work required by the project.

At times, they were in the mud near Buckeye Lake with shovels and plastic bags, setting up and taking samples from mesocosms: mini wetland recreations in outdoor conditions that mimic what natural ecosystems do. At other times, they were in Fennessy’s lab with computers.

In preliminary results, the project has been able to document nitrogen removal among the newly restored wetlands. “We’re trying to identify the restorations that would be most effective in pulling nitrogen and phosphorous out of the water,”Pacheco said.

Fennessy noted that 90 percent of Ohio’s wetlands have been destroyed since European settlement began. “There are so many potential wetlands here,” Chadalavada said, but despite this, “people just don’t understand the benefits of wetlands.”

Chadalavada and Pacheco plan a poster presentation of their findings during a Family Weekend public exhibition of Summer Scholars projects in the Kenyon Athletic Center, Friday, Oct. 13 from 4:15 to 6 p.m. 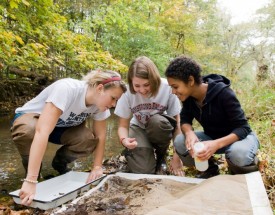 More about the Environmental Studies major.
Join our path forward.
Give To Kenyon
Loading