From hearing an inspirational Commencement address from best-selling author John Green ’00 to celebrating the early success of a budding novelist on the cusp of graduation, Kenyon enjoyed a memorable 2016. Here are this year’s 10 most-read web articles.

This is a collection of photos taken by Kenyon students, faculty and staff to document the beautiful aftermath of an overnight snowfall.

Nearly 500 members of the Class of 2020 were introduced to Kenyon during Convocation. After reciting impressive statistics about the class, Dean of Admissions and Vice President of Enrollment Management Diane Anci hailed this year’s new students as “mature and wise and a little bit brave to choose this wonderful and distinct education.

Could Riley Redgate be the next Ransom Riggs ’01? Rioghnach Robinson ’16 saw her nom de plume debut at bookstores nationwide upon the release of her first young adult novel, “Seven Ways We Lie.” After graduation, the economics major is focused on completing the remaining two installments of her three-book deal.

In an effort to combat the mounting stress and complexity of the college applications process, Kenyon joins with 60 other institutions to “turn the tide” and reshape the admissions process in a way that puts a new perspective on personal performance and achievement.

In an obituary for a long-time member of Kenyon’s Department of Modern Languages and Literatures, students and colleagues share their memories of a beloved Russian professor, mentor and friend.

In September, Kenyon was saddened to lose a member of the community known for his sense of humor and generous spirit. As the director of the Career Development Office, Scott Layson provided guidance to hundreds of Kenyon students seeking to find their place in the wider world off the Hill.

Shortly after admission decisions were released online, this story reported that 1,688 offers of admission were extended to a pool of more than 6,400 applicants, increasing international admissions by 4 percent and SAT scores by 13 points.

In a bittersweet milestone, the College announced that the famously infamous Gambier Grill (known affectionately to all as the Cove) would close its doors to make way for needed improvements in the Village — including plans for a new late-night hangout spot. Nonetheless, the news that the ’70s-era building would be demolished was a sad moment for many a fan of fried mac-and-cheese wedges.

In a personal address to the Kenyon community, President Sean Decatur discussed a topic as difficult as it is important: sexual assault. While acknowledging the necessity of hard work and frank conversations in tackling the problem, Decatur invited readers to join him “in shaping a Kenyon culture based on respect and the freedom to thrive.”

The top story of 2016 was not written, but rather told, by best-selling author John Green ’00 as he delivered a commencement address to the graduating Class of 2016. The speech’s transcript and accompanying video struck a chord with readers who appreciated Green’s honest message that adulthood “is far worse than I could even have imagined,” along with his humorous promise that “one way or another, this will be over in 14 minutes.” 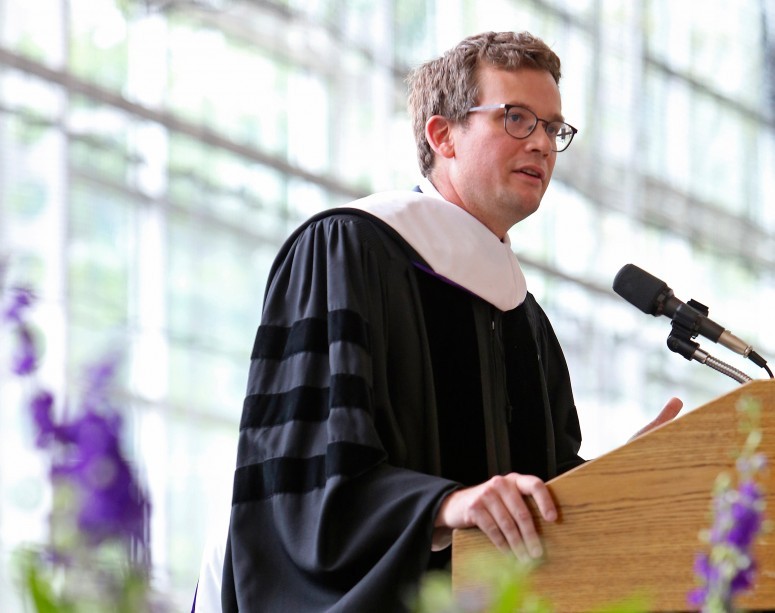