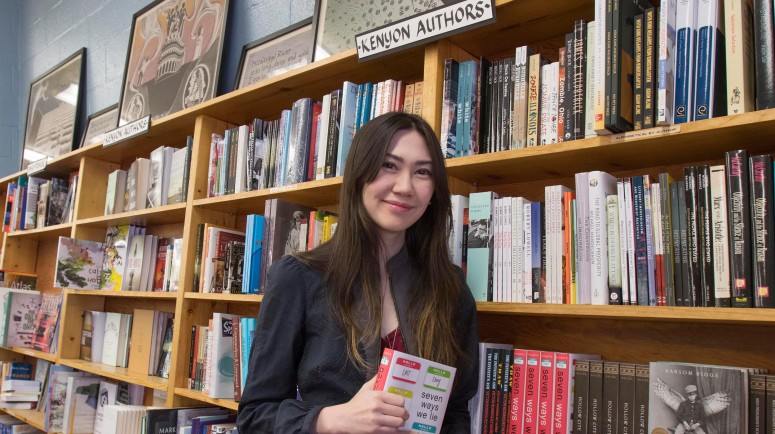 For Rioghnach Robinson ’16, becoming a published author two months before graduating is “exciting” and “surreal.” Her novel, Seven Ways We Lie (Abrams/Amulet), will be released March 8.

The young adult novel, published under the pseudonym Riley Redgate, tells the story of a high school scandal from the points of view of seven characters, each representing one of the seven deadly sins. Landing on Barnes and Noble’s list of “most anticipated” young adult books of the month, it has been praised for its “ingenious narrative structure” and for revealing the “hard edges” and “tender underbelly” of high school.

Robinson began writing the novel about the time she arrived at Kenyon from Winston-Salem, North Carolina. Since then, “it’s been quite a journey,” finding an agent and publisher and drafting numerous revisions.

“There have been lots of rejections, but I have been a stubborn human being who worked and worked until something was good enough to get published,” said Robinson, who has compiled a “slush pile” of manuscripts since she began writing novels as a young teen.

Her talent blossomed at Kenyon, where she won the James E. Michael Playwriting Award (for Mourning Sickness), given annually to a student playwright who exhibits exceptional talent. “The culture here is one of openness and creativity, where people max out their personal potential,” she said. “It is a stimulating environment. You can talk about writing and not feel pretentious because there are so many writers here.”

Robinson grew up a bookworm. She’s read each book in the Harry Potter series “hundreds of times.” Her grandmother was a poet and her grandfather a journalist. As a kid, “I always had my nose in a book,” she said. “I don’t think you can be a writer without being a huge reader. You have to love books to make one.”

Robinson’s youth – she’s 21 – helps her connect with young readers and stand out among other authors in the genre. “There aren’t many super-young authors being published, so I think my age has helped me. But I get paranoid that in five years or so I’ll lose the memory of what it feels like to be a teenager.”

She already has been to a book signing at an American Library Association meeting in Boston and has received positive reviews from readers of advanced copies. “I’m not obsessed with having a best-seller and making an absurd amount of money,” she said. “I just want to find people who connect with what I write.”

Robinson also is a pianist, a songwriter and a member of the a cappella group Colla Voce. Friends and family members expected her to major in English or music, but she chose economics instead “because it exercises a part of my brain that writing does not.”

Her publisher was so impressed with Seven Ways We Lie that it signed her for two more books. Her short-term plan after graduation is to finish that work. For the long term, she envisions “moving to a mid-sized city somewhere, where I can work part-time and write part-time.”