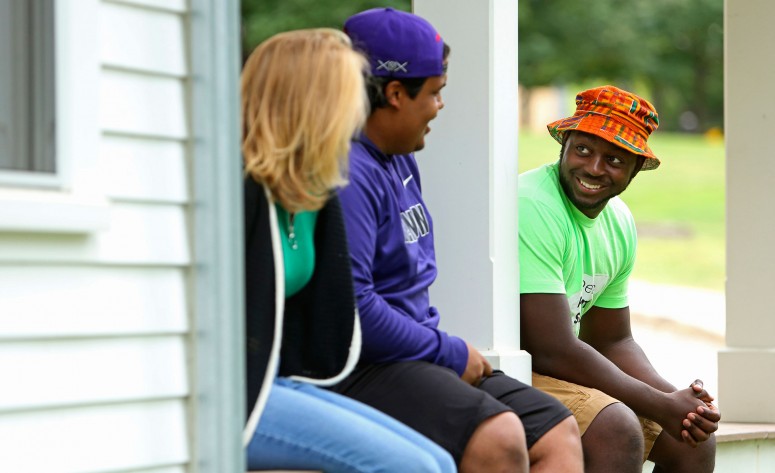 When Jules Desroches ’18 returned to campus for the fall semester, he brought some of his summer with him — including colorful shirts and hats from Ghana and a desire to start a chapter of a political organization at Kenyon. This summer, Desroches took a two-week educational trip to the African country to learn about microfinance loans and also interned at No Labels in Manchester, New Hampshire, a nonpartisan nonprofit that is committed to political problem solving.

The American studies and sociology major from Rockville, Maryland, made phone calls to voters, conducted polls and attended presidential candidate events where he had the opportunity to meet Chris Christie, Hillary Clinton, Lindsey Graham and Marco Rubio, among others. Desroches said he enjoyed meeting supporters of different candidates and finding common ground. “It was like following the campaign trail without a candidate,” he said.

He is one of many Kenyon students who used their summer breaks to work, intern and travel, doing everything from medical research and translations to making sample garments for a clothing designer and writing stories for a television network website.

Kalki Aseged ’17, a neuroscience major from Columbus, Ohio, worked as a research intern at the Center for Minimally Invasive Surgery at the Ohio State University Wexner Medical Center in Columbus. Aseged, who hopes to go to medical school after graduation, examined the benefits of one surgery over another.  She also conducted interviews with patients, followed them through their surgeries, and compiled the data. She credits Kenyon with helping her with the most challenging part of the job: data collection and statistics analysis. “In bio lab, we had to do a lot of analysis and conduct our own research assignments,” she said.

Maya Kaufman ’17, a political science major, interned at CBSNews.com in her hometown of New York City. She wrote pieces used on-air, researched stories for reporters and ran the teleprompter during live broadcasts, in addition to pitching, researching and writing her own stories. “I really liked that the company treats the interns as employees,” said Kaufman, who is a news editor at The Collegian. “They trust you to do the work. You learn from doing.”

Anne Malkoff ’16, a psychology and Spanish double major from Washington, D.C., received a Summer Internship Stipend to work as a research assistant in the University of Michigan psychology department. The research focused on the effects of exposure to community violence among Latino and Latina adolescents in Detroit. Malkoff recruited participants at charter schools, sat in on interviews and transcribed and translated the interviews. In addition, she observed the training of clinical psychologists, a career she wants to pursue after graduation. “The internship confirmed my desire to continue to study psychology,” she said.

Lucas O’Brien ’18, an undeclared major from Lexington, Massachusetts, worked for fashion designer Adam Lippes in New York City, giving him the chance to see all aspects of the fashion industry. He checked on production at factories, helped with model fittings and, on occasion, made sample garments. “Every day, I worked with so many creative minds from all different backgrounds and walks of life,” he said. “Kenyon prepared me in to be in that environment. At Kenyon, your ideas matter.”

Here is a sampling of how other Kenyon students took advantage of their summer vacations.