Gridlock and partisan bickering may have left many Americans disillusioned with politics. But Jules Desroches ’18 believes it’s more important than ever for young people to be engaged.

“We have to realize as young people that we have a lot of voting power,” said the American studies major from Rockville, Maryland. In the 2012 presidential election, roughly 50 percent of Americans aged 18-29 voted, representing a substantial voting block.

Instead of getting behind one presidential candidate or political party, however, Desroches started a Kenyon chapter of No Labels. The national nonpartisan group is chaired by former Utah Governor Jon Huntsman and former Connecticut Senator Joseph Lieberman and counts about 70 members of Congress — about half from each party — among its members. No Labels is committed to four objectives: creating new jobs, securing Social Security and Medicare, balancing the budget and making America energy secure.

Desroches spent the summer canvassing for No Labels in Manchester, New Hampshire, and meeting presidential candidates from both parties, including Hillary Clinton and Jeb Bush.

“Based on where I stand politically, I wouldn’t have gone to listen to some of the candidates I ended up seeing,” he said. “I felt like I got a more balanced view. I wanted to bring that to campus.”

Working with vice president Kenda Tucker ’18 and social media chair Lindy Wittenberg ’19, Desroches, who is also a community advisor and plays defensive end and defensive tackle for the Kenyon football team, collaborated with the Democrat and Republican clubs to host viewing events of the initial presidential debates in the fall. The Republican debate event, held in Higley Auditorium, was particularly well attended — which surprised him. “With Kenyon being a more liberal campus, we had a decent amount of people show up who weren’t necessarily Republican but who wanted to listen to what the other side had to say,” he said. “I think that’s the coolest thing.”

He didn’t like the demonization of the opposing party evident in both debates, however. “The implication of that is that the whole entire ideology and anyone who agrees with it is completely out of their mind,” he said.

His goal, in part, for No Labels at Kenyon is to humanize all sides in the process. “Maybe I don’t agree with you, but I can see where you’re coming from instead of just telling people you’re a crazy person who doesn’t care about America,” he said. “And maybe we can get things done.”

In its first semester on campus, No Labels counted about 50 students as members. Desroches hopes to host more social events this semester, piggybacking on what the other 140 or so chapters on college campuses nationwide have done. The group isn’t just about the presidential election, he says, so he sees it lasting well beyond his time at Kenyon. He’d ultimately like to see the organization get more involved locally.

Desroches, who credits his father, Marcel Desroches Jr. P’18, with giving him an interest in current events, says he doesn’t see himself ever running for political office. His own future will involve social justice in some way, topics that are so divisive they’re beyond the scope of No Labels. But he hopes that the work of No Labels will make tougher conversations about subjects like immigration possible.

“As callous as it sounds, we’re next in line,” Desroches said. “Whatever is going on now is not the best. We don’t have to accept that partisanship is and always will be. All we have to do is act differently and as young people get out and vote so people value our opinion.” In the mainstage production of "A Free Man of Color," students blend comedy with issues of race and class. 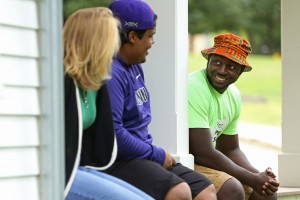 How political activist Jules Desroches ’18 and four other students took advantage of their summer vacations.