Although Professor of Music Ted Buehrer ’91 often bikes about 5 miles to work, he used to think people who rode long distances were “nuts,” he said.

His opinion changed when his wife, Leslie, found out she had breast cancer. She successfully came through treatment at the Ohio State University Arthur G. James Cancer Hospital in nearby Columbus, and Buehrer decided to give back to the hospital. On Aug. 8, he joined thousands of riders for Pelotonia, an annual bike tour from Columbus that ends on Kenyon’s campus for rides of 75 and 100 miles.

The ride from downtown Columbus to the Kenyon Athletic Center was Buehrer’s first bike event. He also rode in support of his sister who recently was diagnosed with breast cancer and is being treated at the hospital, known as the James.

Buehrer describes the hospital as a high-tech, cutting-edge facility where everyone from the greeters to the doctors treated them kindly. “I just felt like we were in good hands the whole time,” he said.

Chief Business Officer Mark Kohlman, who coordinated Kenyon’s team of 14 riders, said the College’s partnership with Pelotonia not only provides support for the cancer treatment center, but also gives Kenyon exposure to people from Columbus, the closest metropolitan area to campus. Visitors remark about how close Kenyon is to Columbus and how beautiful the campus is, Kohlman said.

Plus, 24 Kenyon students have had the chance to research cancer at Ohio State in the four years that Kenyon has teamed with Pelotonia. “It’s a priceless connection we have now to central Ohio,” Kohlman said.

Kohlman also has a personal connection to the James. When his wife, Professor of Sociology Marla Kohlman, was diagnosed with stomach cancer in 2012, they turned to the James for treatment. He credits the hospital with her now being cancer-free. “In my mind, if you have cancer, that’s where you need to be if you live in this area,” he said.

In this year’s Pelotonia, Kenyon parents rode on the College’s team for the first time, with two parents and two students riding, along with President Sean Decatur.

Some riders stayed on campus overnight and got back on their bikes to finish their 155- or 180-mile rides Aug. 9. Shorter routes of 25 and 50 miles do not end at Kenyon.

Maureen Tobin, graduate school and preprofessional advisor, rode in her third Pelotonia and said the race becomes more meaningful each year as she learns of more people with cancer. Spectators who clap, cheer and ring cowbells inspire her to make it through seven hours in the saddle, she said. Last year, one woman held a sign that said, "Just had my last chemo treatment. Thanks for riding to help me get better."

“You definitely feel as though you are a part of something bigger than yourself,” Tobin said.

Buehrer, who leads the Jazz Ensemble, trained by riding about three times a week, often with a group of students, employees and other community members who organize regular rides.

“I thought I would get into this and find it to be really taxing, and I would have to stick it out just because I had said that I was going to do it,” he said. “But I’m thoroughly enjoying it.” 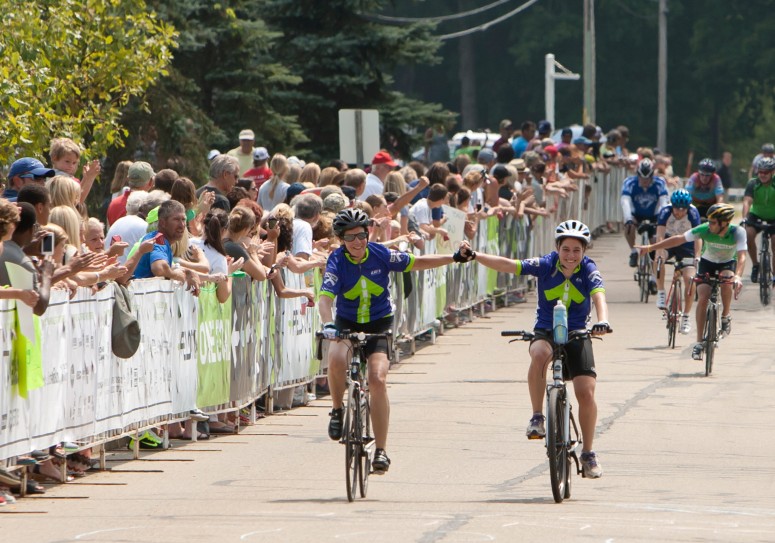 President Sean Decatur rides with other members of the Kenyon peloton. 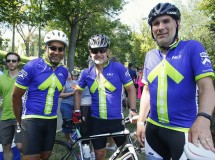 President Sean Decatur and other members of the Kenyon peloton. 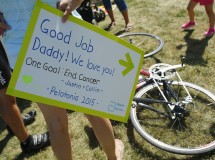 A sign of support at the finish line at Kenyon. 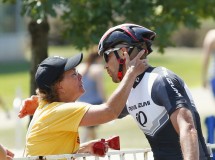 At the finish line at Kenyon. 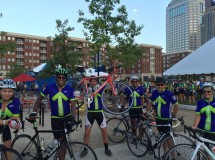 Members of the Kenyon peloton get ready to ride at the start of Pelotonia. (Photo by Maureen Tobin) 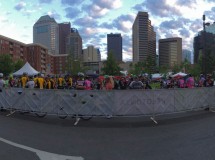 The starting line in downtown Columbus. (Photo by Camille Pipino '17) 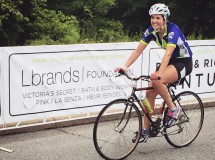 Riders set out from Kenyon for the second day of the event. (Photo by Jason Cinti '16)