The Franklin Miller Award, named in honor of Professor Emeritus of Physics Franklin Miller, Jr., is presented each semester to the students who have contributed most significantly or unusually to Kenyon’s academic environment. This semester, Toneisha Stubbs ’18 of Cleveland and Max Smith ’18 of Chapel Hill, North Carolina, received the illustrious award for their irreplaceable campus presences and inspiring strides in research.

As a child, Smith, a French and international studies major, spent many summers journeying across Africa with his parents. The son of two traveling journalists, he grew accustomed to the sights and sounds of the continent’s vast savannas and thundering cities. But when Smith returned to the Central African nation of Cameroon during a semester abroad, he stumbled upon something new: Cellphones. Everywhere.

“You enter villages that might not have [access to clean] water, might not have electricity, but you have Androids that are charging [via solar panels] on top of a hut,” said Smith, who became fascinated by the innovative and ingenious ways in which Cameroonians use their cellphones.

In Cameroon, a standard mobile phone costs the equivalent of about $5. Falling technology prices have ignited an explosion in cellphone consumption, revolutionizing Cameroonian economics and social life. As part of his off-campus study program, Smith researched how this cellphone proliferation has affected the pace of life and the rural-urban divide in the country.

“I’ve always been interested in the resilience and local agency that I’ve seen in Africa,” he says, “which is not always a discourse that’s most put out when speaking of that continent. I can see that through cellphones. Studying the local adoption of cellphones allows me to highlight that resilience and resourcefulness.”

Smith also has studied cellphone use in Guinea through a summer job with a mobile telephone company. After graduation, he hopes to continue his research in Togo as a Fulbright Scholar.

Research experience has played an equally crucial role in the academic career of Stubbs, a neuroscience major. Last summer, Stubbs participated in the University of Florida’s Summer Neuroscience Internship Program, where she was assigned to a lab studying the effects of cannabis on memory retention. Her research team trained a group of rats to respond to a working memory test and exposed a subset of the group to a controlled amount of cannabis smoke. The memory test was then re-administered to the exposed rats, yielding surprising results.

Stubbs and her colleagues found that cannabis exposure had no effect on the memory performance of the male rats, but actually enhanced that of the females. This perplexing discovery kindled a burning desire for more research, inspiring Stubbs to seek new lab experiences and opportunities after she graduates next spring.

On campus, Stubbs has been a standout mentor and role model as a teaching assistant for Kenyon’s Department of Chemistry. Associate Professor of Chemistry Kerry Rouhier deems her a “staple in the department. … The students really value Toneisha’s expertise and her ability to keep things calm in what can be a pretty high-anxiety lab setting.”

Stubbs feels it is the stalwart confidence developed during her time at Kenyon that has allowed her to so effectively empower, elevate and support her STEM peers in the classroom. “Whether it’s telling a student about how I made the same mistake when I was in chem lab or sharing my experience as a low-income student of color on campus, I hope to show students that they are more than capable of succeeding here,” she said.

Both Smith and Stubbs attributed their academic passions to their foundational and formative time on the Hill. “Kenyon allows me to give the best that I have because of the opportunities it presents. How small it is, how kind people are. It makes you want to be the best you can,” said Smith, who was nominated for the award by Assistant Professor of French Pierre Dairon.

The Franklin Miller Award was established by Edward T. “Chip” Ordman ’64 in honor of Miller, who passed away in 2012 at the age of 100. For their invaluable contributions to the College, both on campus and off, Stubbs and Smith will each receive a $250 credit to the Kenyon College Bookstore. 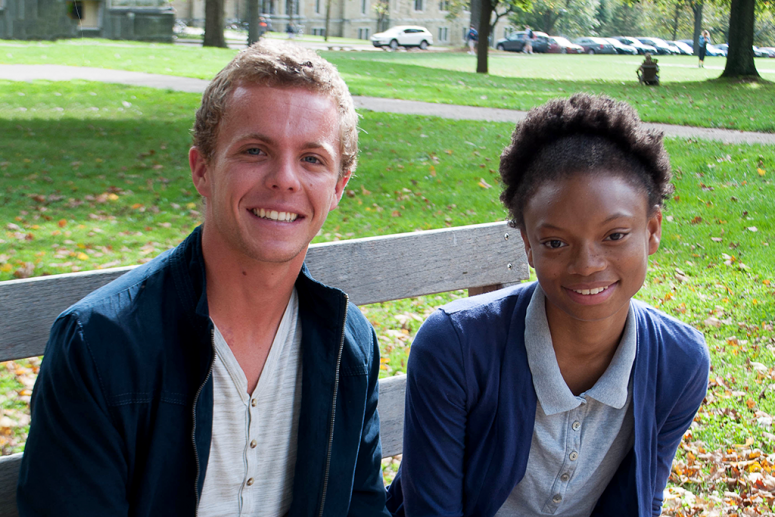