Senior artists put their creativity on the line April 18 through the end of the semester with the public display of their work in the Gund Gallery.

The annual senior capstone — the capstone experience for studio art majors — “is not for the faint of heart,” said Associate Professor of Art Read Baldwin ’84 P’15 ’17, chair of the Department of Studio Art. “It is a yearlong, often difficult journey that our studio alumni consistently report was the highlight of their Kenyon careers.”

The emphasis on individual expression typically yields a great deal of diversity, and the show this year is no exception. Themes ranging from gender violence to childhood memories are depicted in a variety of forms using media as disparate as video and Styrofoam.

Kelsey Ewing ’16 of Bedford, New Hampshire, is among the artists who found beauty and meaning where it might be least expected. Ewing found branches and discarded metal at Knox County sites to create a commentary on the environment. “Growing up . . . exploring the woods and playing in the mountains fostered (my) deep appreciation of the natural world,” she wrote in the display statement that accompanies her sculpture.

Sophia De Pascuale ’16 of Gambier also turned trash into treasure when she culled materials from area scrap bins and garages to fashion her art piece.

Like most students in the show, this is the first gallery exhibition for Christopher McCann ’16 of Locust Valley, New York. McCann arranged 18 life-sized photographs inside a metal structure that invites viewers walking among them “to explore the human body and how it relates to memory,” he said.

“My entire family is coming from the New York and Boston areas to see the show,” said McCann, who aspires to be a fashion photographer. “It’s exciting. This is an experience I needed to graduate and pursue my art professionally.”

Elizabeth Norman ’16 of Baltimore is among a handful of students working in video art. Her piece weaves together “low-culture” footage, including infomercials, presidential campaign advertisements and a reality dating show audition, to explore aspects of the female image portrayed daily in mass media.

“This is a pretty big deal for me,” Norman said of the show. “My boyfriend and family are coming out to see it. Getting to delve into video has been a great opportunity for me. We’ve been trying to push through to the end, and the fact that the show has finally arrived is a great relief.”

Brianne Presley ’16 of Mount Vernon, Ohio, who also is a dance major, is among several students combining a double major in their works. “With video art, I am able to bridge the gap between my two loves — dance and studio art,” she said.

A reproduction of a Sandy Hook Elementary School classroom by Jackie Arkush ’16 of Los Angeles is an example of her miniatures addressing social concerns. “The issues are not new,” wrote Arkush, also an anthropology major, in her statement. “They have loomed large for many years, and yet in each case I feel that we fail to sufficiently respond to what is directly in front of us.”

The senior capstone requires students to sign a contract with the gallery, write a display statement, compose a marketing pitch and issue an oral defense of their work before faculty. “We want them to come out of Kenyon with a ready-to-go portfolio, either to get into graduate school or to have their works accepted for gallery spaces,” Baldwin said.

A reception opens the show Monday, April 18, at 5 p.m. Getting there was a grind, but Max Beatty ’16 of Baltimore said he will miss the process. “I really enjoyed going to the studio every day, sitting down and working through problems. It became part of my daily routine, part of my identity.” 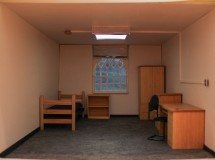 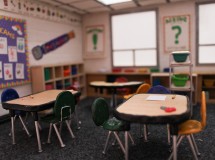 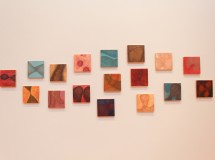 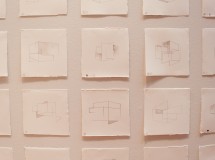 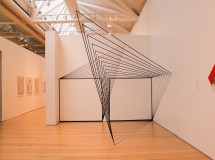 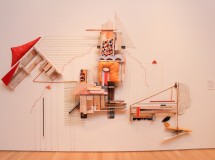 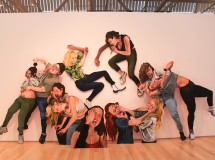 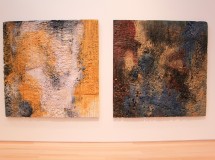 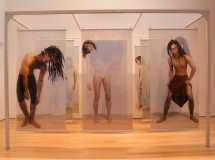 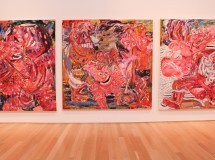