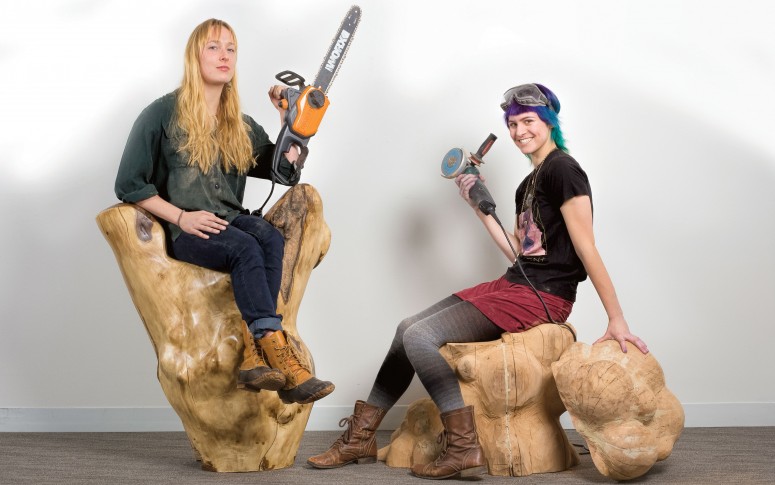 The assignment from Professor of Art Barry Gunderson for his Art with a Function class was straightforward: make something to sit on. And the ideas for studio art majors Kelsey Ewing ’16 and Emily Green ’17 came easily. Both envisioned making beautiful chairs. But how the two would execute their plans cast a shadow on their projects; the cost of their chosen material—wood—was prohibitive.

Ewing and Green scoured the trees behind the Horvitz Hall studio art building, but found nothing that would serve their purposes. Trees were too small or rotten. Gunderson, as he has done for students in the past, suggested asking the maintenance department if it had any logs the students could use.

“Mostly, if I send [students] down there it’s based on their desires for a type of form or a type of wood,” he said.

With a phone call to Director of Facility Operations Steve Arnett, the light shone through the forest for Ewing and Green. “We were like kids in a candy store,” Ewing said of the smorgasbord of logs they found in the workshop, tree trunks from fallen trees on campus that otherwise would have been turned into mulch. “They were like, ‘We have a pile of logs,’ and we were thinking your everyday, foot-wide logs, but then we saw this huge pile of five-foot logs,” she said. “We were in heaven when we saw them.”

Working with full trunks or large logs gave Ewing and Green the chance to employ the subtractive method of sculpting, in which the artist starts with too much material and chips away at it until a form is revealed, rather than starting with small pieces of material and putting them together to build a form.

Art with a Function was Green’s first sculpture class. For the chair project, the Vienna, Virginia, native originally envisioned constructing a bench suspended by two “large, wooden, sort of bubbling masses.” But when it proved to be a little too difficult, even with the chainsaw she and Ewing bought to handle the huge chunks of wood, she simplified her idea down to just one knobby, viscous pillar with a bench seat circling around it. “I liked the idea of the juxtaposition between the appearance of some sort of liquid form, and I wanted it to look like it was melting into the floor, oozing wood,” Green said.

Flaws in the wood didn’t detract her from choosing the piece of oak she thinks might have originally come from the tree outside of Leonard Hall that was cut down at the start of the semester because its roots had grown through the water pipes, leading to flooding in the building. “The wood that I have does have some termite damage, but it sort of adds to the beauty,” she said. She is considering doing an independent study in the spring continuing with the theme of liquid-y sculptures, and has received a grant from the Horn Gallery to pursue the project.

For her chair, Ewing, from Bedford, New Hampshire, chose the forked end of a walnut tree log that offers a natural sitting spot. “I ended up kind of accentuating the natural form, stripping the bark and bringing out the natural wood of it,” she said.

Getting to connect with campus trees has inspired both students to work with recycled wood again in the future. “I would love to work with tree trunks again and possibly use fire to sculpt and make legs or beautiful patterns in the wood,” Ewing said, adding that she may work recyclable materials into the centerpiece of her senior project next year.

While both students loved that the logs they used were free and delivered to the studio by the maintenance department, the origins of the wood itself gave their projects added meaning. “I think it’s cool for people to see trees that are cut down, especially when people are upset when a tree that’s so old and beautiful is taken down, though it’s probably taken down for a good reason,” Ewing said.

Gunderson, who worked closely with both students on their projects, enjoyed watching them navigate the process of working with trees. “They’ve both found some muscles they didn’t know they had because they’re wrestling these tree trunks,” he said. “All of that is certainly a part of the discovery of what they were working with, and they were willing to handle the challenges in a successful way.”