Restored wetlands on agricultural land can boost the well-being of the environment, recent research by Professor of Biology Siobhan Fennessy and others has shown.

The research by Fennessy, Kenyon’s Philip and Sheila Jordan Professor in Environmental Studies, started in 2010 thanks to a grant from the federal Natural Resources Conservation Service (NRCS). Concerns about the increasing global use of nitrogen- and phosphorous-based fertilizers that run off of farmlands and become water pollutants spurred the research. The pollutants, in turn, can starve waterways of oxygen.

The study is among the first to demonstrate the water-quality benefits of converting farmland back to wetlands.

“We know we have so many acres (of restored wetlands) but, from an ecological sense, what are they doing? What kind of benefits are they providing?” Fennessy said. “We’re spending money on conservation, but we don’t always know what we’re getting back for that funding.”

The NRCS assembled a team to study the issue across the country, including Fennessy and Christopher Craft, an Indiana University professor of rural land policy. Historically, natural wetlands and riparian zones have been cleared to make way for agriculture. Those areas are now the target of restoration under several NRCS conservation programs, including the Conservation Reserve Program and the Wetlands Reserve Program.  “There’s been work done on wetlands generally … but not specifically looking at agricultural lands and the success of restoration in those lands as a function of the different methods that are used for restoration,” Fennessy said.

Fennessy, Craft, and several student researchers took soil samples and performed field experiments in wetlands and riparian areas. In the lab, they measured soil processes such as de-nitrification that remove excess nitrogen from agricultural run-off before it reaches local water supplies. “We went to different sites around Ohio, different riparian areas,” said Claire Anderson ’10, who is now studying genetic counseling at the Johns Hopkins Bloomberg School of Public Health. Anderson and student researcher Pamela Moriarty ’11 went on to present their work at the national conference of the Society of Wetlands Scientists. “We were interested in looking at the effect that restored wetlands have on improving water quality, particularly the mechanisms by which they remove nitrogen from water as it moves from farmlands to rivers and streams,” Fennessy said.

Concern about the effects of fertilizer run-off has grown recently due to its effects on local water supplies as well as on the Mississippi River and the Gulf of Mexico. The flow of excess fertilizer ultimately causes a loss of oxygen in a large zone in the northern Gulf of Mexico, jeopardizing aquatic life. “It creates what is called the ‘dead zone’ every summer,” she said. “These wetlands are seen as one of the land-management practices that can help reduce water pollution.”

The study’s findings on the value of restoring wetlands and riparian areas are especially relevant because global use of nitrogen- and phosphorous-based fertilizers is expected to increase. “One interest of the NRCS is showing that taxpayer investment in these conservation practices is yielding a tangible benefit to the environment,” Fennessy said. “We have a lot of severe environmental problems right now, and I find it satisfying to work on real problems on the ground and hope to make a difference.”

The research by Fennessy and others has been accepted for publication in the academic journal Restoration Ecology. 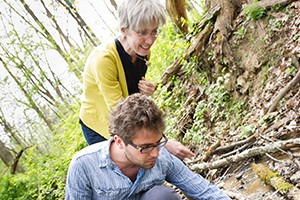