When Angus MacDonell took the job as manager at the Kenyon College Bookstore, it meant a cross-country move for him and his family. He had been director of the Huntley Bookstore of the Claremont University Consortium in Claremont, California, since 2009 and a longtime resident of southern California.

Now a familiar face at the bookstore, MacDonell took a few minutes to talk about the transition and his plans.

Q: You moved here from southern California almost three months ago. What do you think of central Ohio so far?

A: I’ve been lucky. Both August and September were wonderful for weather. Everyone is really friendly. Of course, everyone wants to know why would I move to Ohio.

Q: What do you tell them?

A: Look around you. This is one of the most gorgeous places I’ve ever lived by far. Folks say, “Have you been through a winter?” When I say no, they laugh crazily. But it’s beautiful here. I see something new every day that amazes me.

Q: What are your plans for the bookstore?

A: We’re going to implement a book club. Anyone who joins this club — students, faculty, staff, anyone who lives here — if they buy 10 books they get the 11th for free. I see a lot of the same people here day in and day out buying books. We think they should be rewarded for being so loyal to us.

We’re also focusing on a relaunch of the website in the next month or so. The front page will focus on new products we have, including ultimately some new lines of apparel for alumni.

Q: Your son Morgan ’17 decided to transfer here after you accepted the position, though he originally planned to finish his education at Cal State Long Beach. What prompted the change of heart?

A: He was looking for a fine arts program, which they have at Cal State Long Beach. He didn’t know much about Kenyon. As he started looking at it, he was thrilled. Now that he’s been here, enrolled as a studio art major, he’s just amazed. He’s happy all the time. His classes are tough, lots of work to do. But he’s really engaged.

Q: What are you reading right now? 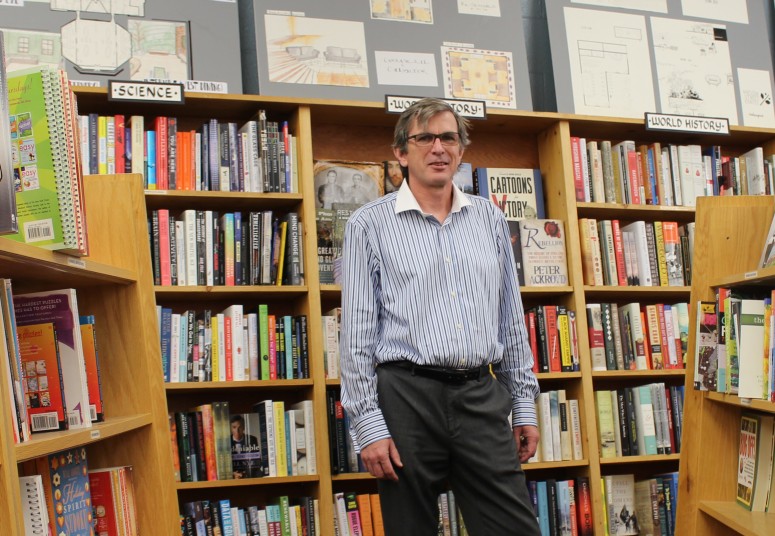