Rosenblatt, the 15th recipient of the Kenyon Review Award for Literary Achievement, explores the human condition with a wry sense of humor and penetrating point of view in six off-Broadway plays and 17 books, including bestsellers Unless It Moves the Human Heart, Rules for Aging and Children of War. He wrote essays for Time and The PBS NewsHour.

His lecture culminated two days of festival events, including readings by authors and a panel discussion on the future of journalism.

The festival is a celebration of Kenyon’s commitment to writing, said Review Editor David Lynn ’76 P’14, a professor of English. “It’s all about feeling good about literary endeavor and books and writing and being in it together. What makes Kenyon a very special and unusual place is that writing and literature are at the very core of its identity.”

Rosenblatt has been a fixture at Kenyon over the years, teaching through different residencies and giving the 2009 Commencement address. He introduced popular novelist E.L. Doctorow ’52 H’76 at a ceremony in New York City when Doctorow won the inaugural Award for Literary Achievement in 2002. Rosenblatt holds the title of Literary Ambassador on the Review masthead, a position that Lynn says is “sort of a joke” meant to show how dear Rosenblatt is to the literary magazine.

Rosenblatt joked about his title but not about the what the award means to him: “Nothing could top being KR's literary ambassador — a position as mystifying as any international ambassadorship, but involving a bigger house and much more money. That, and all kidding, aside, the KR literary award is the professional honor of my life. That's the truth.”

Past winners include Elie Wiesel, Margaret Atwood and Joyce Carol Oates. Rosenblatt has been one of America’s most distinguished writers for four decades, Lynn said. “He has a very strong love for Kenyon, and we love him.”

The Review received 250 giveaway copies of Rosenblatt’s Kayak Morning. Describing his solitude in his kayak in the mornings, the book explores handling grief after the death of his 38-year-old daughter, Amy Solomon, from an undetected heart condition.

Rosenblatt said he is honored that people at Kenyon and the surrounding community read and talked about his book ahead of his visit in gatherings at a local library and through online discussions.

“There's no place like Kenyon for a writer,” he said. “The students catch everything you're throwing. The faculty makes for the best in literary companionship. KR, under the remarkable creative editorship of David Lynn, is the finest such publication in the country.” 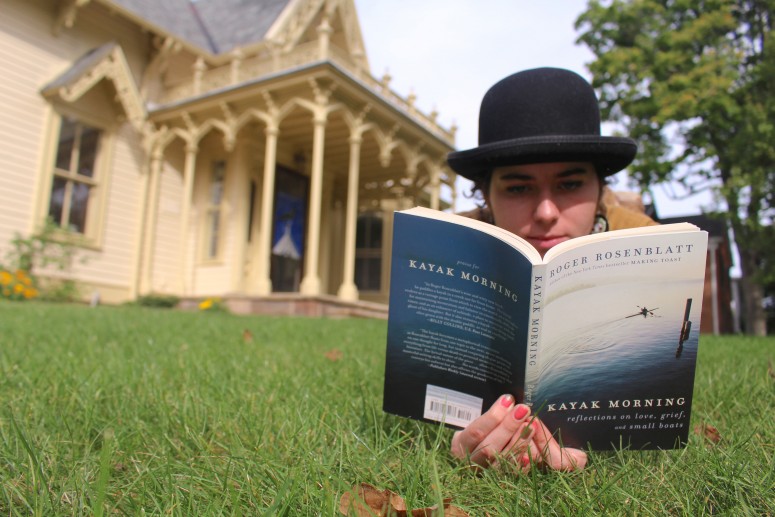