When Claire O’Donnell-McCarthy ’17 made a wish list of prospective employers last semester, one firm stood out. The employment website for the investment firm BlackRock listed criteria that seemed to perfectly suit her liberal arts background.

The firm “didn’t care what your major was,” she said, “but was looking for someone who had a love for learning, could work with a team and had an ability to learn on the fly. At Kenyon, I have been solving math problems with friends for years, and learning on the fly is what a liberal arts education is about.”

A double major in math and economics, O’Donnell-McCarthy applied to the New York-based firm, the world’s largest asset manager, and landed a position as a client services analyst. She will start in August, working as a specialist in BlackRock’s operating system, Aladdin.

O’Donnell-McCarthy is among more than 50 Kenyon seniors who received job offers by mid-February, according to Maureen Tobin, interim director of the Career Development Office. “We haven’t even started our senior survey yet, so we feel pretty good about that,” Tobin said.

According to Professor of Economics Jay Corrigan, who is O’Donnell-McCarthy’s academic advisor, BlackRock is not the only financial firm interested in hiring well-rounded graduates. Companies “definitely are seeking liberal arts majors who can ask the right questions and answer them in clear, concise prose,” he said.

O’Donnell-McCarthy often talked with Corrigan about her job search. “She is good at figuring out what she wants and taking the steps to get there,” he said. “She wanted to work in finance, and she followed through on that. Our math and economics majors interested in careers in finance who start their job searches early in their senior years tend to be very successful.”

The Career Development Office offered O’Donnell-McCarthy a place to practice her interviewing skills and conduct several of her job interviews using Skype. She also reached out to Kenyon alumni for internship opportunities and job prospects. “Alumni were so eager to talk to a Kenyon student,” she said.

In addition to completing coursework for her double major, O’Donnell-McCarthy minored in Chinese, played field hockey, completed three summer internships and spent a year in a study-abroad program at the London School of Economics and Political Science. While her year in London helped prepare the Cleveland-area native for life in a major metropolitan city, she said her time at Kenyon instilled in her values that she hopes to carry with her throughout her career.

Chinese classes with Professor Jianhua Bai “gave me a love of learning,” she said, and economics classes “gave me a different way of interpreting the news.” O’Donnell-McCarthy described a seminar in health economics taught by David Harrington, the Himmelbright professor in economics, as “the quintessential Kenyon class: It was small [seven students], based on student discussion, and each of us had to present a paper in the end.”

As she prepares to depart Gambier in May, O-Donnell-McCarthy is grateful for her range of Kenyon experiences. “No one activity defined me,” she said. “I got to study economics and math, play field hockey, travel abroad, and even return to playing the harp, which I stopped doing in high school. When I came here, I couldn’t say ‘hi’ in Chinese. Now I am able to carry on conversations in Chinese with my Chinese friends. I am sort of shocked that I was able to do all this in four years.” 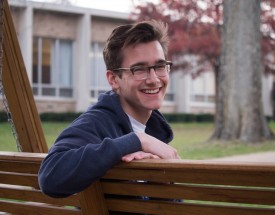