Here is a sampling of where members of the Class of 2017 are headed. Seniors can share their post-graduation plans with Kenyon using this form.

Adama Berndt, a neuroscience major: working in a neuroscience lab as a post-baccalaureate Intramural Research Training Award (IRTA) fellow at the National Institutes of Health.

Gianna Biaggi, an international studies and American studies double major with a minor in Italian: establishing a literary magazine program in Meridian, Mississippi, and a library and literacy tutoring program in the Kibera Slums of Nairobi, Kenya, as the winner of the Samuel Huntington Public Service Award (a national award giving to a college senior to complete a public service project).

Lexi Bollis, an English major: working for Teach for America as an early childhood educator in Tulsa, Oklahoma.

Eric Chu, a sociology major with a minor in English: joining City Year as a corps member in Seattle.

Abby Coleman, an economics major: working as a commodity analyst for Genscape in Boston.

Emma Conover-Crockett, a history and Asian studies major: working as a paralegal at Covington & Burling, LLP, in Washington, D.C.

Eliana Crawford, a physics major: participating in an intensive coding program with Horizons Schools of Technology in San Francisco.

Holloway Cushman, a synoptic major focusing on somatics: working as a project manager for LMS, a digital influencer and brand management firm in New York City.

Pankti Dalal, a mathematics major: participating in the University of Pennsylvania's Penn Residency Master's in Teaching Program as a Mathematics Teaching Fellow at St. Paul's School in New Hampshire.

Emily Daluga, an English major with a creative writing emphasis: undertaking an editorial internship for the Norton Critical Editions in New York.

Ian Drummond, an English major: undertaking maintenance work at the Golf Club in New Albany, Ohio, a top-40 ranked course in the country.

JaLon Eason, a psychology major: working as an RA at JHU CTY in Lancaster, Pennsylvania, for the summer and then moving to Denver as a City Year Corps member.

Haley Eligio, a psychology major with minors in anthropology and music: joining City Year as a corps member in Chicago.

Joia Felton, a modern languages (Spanish, French) and psychology double major: working with Concordia Language Villages at a Spanish immersion summer camp over the summer and then teaching Spanish at Severn School in Annapolis, Maryland.

Evan Frazier, a mathematics and economics double major: working as an analyst for Altair Advisers, a wealth management firm in Chicago.

Drew Fulton, an English and economics double major: accepted into New York University's Summer Publishing Institute with the intent of receiving a certificate in publishing and working in the sales division of a top publishing house.

Alana Gale, a modern languages & literatures and English with an emphasis in creative writing double major: working in Austria as a Fulbright teaching assistant.

Alexandra Hansen, a Chinese area studies, international studies and Asian studies triple major with a minor in anthropology: working as a bilingual assistant for the Middlebury Chinese Summer School and then pursuing a graduate certificate in Chinese and American studies at the Hopkins-Nanjing Center (an educational collaboration between Johns Hopkins University and Nanjing University).

Deb Malamud, a political science major: working as a case assistant at Irell & Manella, LLP, a law firm with an emphasis on intellectual property, in Los Angeles.

Nick Maryan, an economics major: working for Yelp as an account executive in Chicago.

Lauren Michael, a biology major: working as a field technician for the University of Idaho, assisting with a research project on the Yuma Ridgway's Rail in southwestern Arizona and southeastern California.

Molly Narkis, a mathematics major with a minor in anthropology: joining the Operations Analyst Development Program at JP Morgan Chase & Co. in Columbus.

Claire O'Donnell McCarthy, an economics and mathematics double major with a minor in Chinese: working as an Aladdin Client Services Analyst at BlackRock in Manhattan.

Emily Olson, a biology and international studies double major with a concentration in environmental studies: joining the Peace Corps to teach English in Ukraine.

Morgan Perrett, a biochemistry major: working as a medical scribe for iScribeMD in Kalamazoo, Michigan.

Aldis Petriceks, a biology major with a minor in Chinese: conducting research as an anatomy scholar at Stanford University's School of Medicine and taking on a research assistant position at the Stanford Linear Accelerator Center.

Alex Pinkus, an economics major with a minor in statistics and a concentration in the integrated program in humane studies: working as a junior operations association at Cambridge Associates in Arlington, Virginia.

Tyler Roldan, an economics major with a concentration in the Integrated Program in Human Studies: working as an institutional equities trader for FBR Capital Markets in Washington, D.C.

Tayler SantaMaria, a biology major with a concentration in environmental studies: spending the summer researching the effects of climate change on plant and whole forest distribution and ecophysiology at the University of Bergen in Norway.

Hallie Schulwolf, a psychology and American studies with an education concentration double major: teaching with the Uncommon Schools in Brooklyn, New York.

Sarah Grace Spurgin, a political science major with a concentration in environmental studies: organizing environmental policy at a grassroots level as an assistant canvas director for the Fund for the Public Interest in Minneapolis.

Winnie Thaw, a history major with a minor in Russian: interning with two UN agencies in Bangkok's UNHQ for six months each, then interning for the Senior Regional Human Rights Adviser for Asia and the Pacific under the United Nations Development Group and as part of the Office for the High Commissioner for Human Rights. In the spring, Winnie will intern in the Office of the Resident Coordinator (the highest UN official and the chief of a UN diplomatic mission in a country, directly appointed by the Secretary-General). This office is under the United Nations Development Programme.

David Thoensen, a history major: working as an investment banking analyst for the Natural Resource Group at UBS Investment Bank.

Molly Wyrsch, an English major with a minor in classics: joining the Episcopal Service Corps in New Haven, Connecticut. 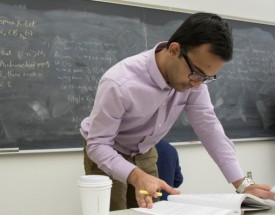 Outcomes for the Class of 2016

When students from the Class of 2016 headed off the Hill, they landed everywhere from consulting firms to non-profits to research labs.

Outcomes for the Class of 2016.
Join our path forward.
Give To Kenyon
Loading