After an illustrious 39 years at Kenyon, Royal W. F. Rhodes, the Donald L. Rogan Professor of Religious Studies, is preparing to say his farewells to the Hill.

Last semester, he finished his 38th and final iteration of the legendary course “Social Justice: The Ancient and Modern Traditions” alongside Professor of Sociology George E. McCarthy. Rhodes’ final “Meanings of Death” course, a perennial student favorite, will conclude this spring.

Before his Feb. 24 Kenyon Unique lecture, Rhodes answered questions about his Kenyon career and what he hopes to leave with his generations of Kenyon students, colleagues and friends.

My dissertation advisor at Harvard knew I was interested in religion and literature. I can remember him saying, “Apply to this job. It’s really for you.” So, I did. I didn’t know much about Kenyon before I went to Harvard, but I had some really close friends who had been students of Robert Lowell [’40], Peter Taylor [’40 H’71], Elizabeth Bishop, John Crowe Ransom [H’57], and other famous Kenyon lecturers. They all talked fondly about Kenyon.

Of course, coming to a place where there would be close personal contact with undergraduate students was something I was looking for. From my first time departing the plane for my interview, to now, almost 40 years later, it’s been quite a ride. There were a couple of times when other institutions tried to lure me away, but I decided that this is really where I belonged and where I was happiest. The students keep me here, frankly, and my department has been a real support over the years.

Where did your interest in religious studies and Christianity originate?

I’ve always been interested in Christianity. My mother’s family is Irish Catholic and my father’s family is Protestant. Visiting my grandparents and aunts and uncles, in an era when Catholics and Protestants were still, in this country, at odds, was a formative experience.

As an undergraduate at Fairfield University, I majored in classics, but my professor of Latin and Greek, a Jesuit priest, recommended I look into divinity school. This was at the time of the Second Vatican Council, so there were a lot of interesting things going on within the Catholic Church, but also within the connection between Catholics and Protestants. I was reading all of the theological treatises that were coming out of Vatican II. It was a really exciting time for religious studies.

How has your “Meanings of Death” course evolved during the course of your career?

I took over “Meanings of Death” from Jerry Irish, a provost at Kenyon. We thought it was an important topic and area to continue teaching. I keep on telling my students that it’s not a therapy or grief counseling class, but, in the space of 10 years, 18 members of my family died. I was trying to find some way to navigate that period, both emotionally and intellectually. Why don’t we talk about death? Over the years, I’ve learned a lot from students about what’s on their minds. I call it the forbidden zone. People don’t want to talk about death, yet it’s so crucial.

I call “Meanings of Death” a course on the languages of death and dying. We’re trying to find a language that’s authentic, and, to that end, I’ve used more and more poetry in my class. Poetry, for me, is that bridge into the unknown that pushes the limits of language. If someone were interested in the language of death and dying, I probably wouldn't recommend some theological text or textbook, but poetry, or a novel.

What does social justice mean to you? What does religious studies have to do with it?

There is no one definition of social justice. The earliest use of the term was in the 19th century by a Jesuit scholar. His student, the eventual Pope Leo XIII, wrote the first social encyclical that became the normative position of the Catholic Church. So, I think there’s a religious bent to questions of social justice. I keep returning to Dr. Martin Luther King’s great phrase: “The moral universe has a long trajectory, but it bends toward justice.” I think what he's getting at is trying to achieve a moral economy.

In high school, one of my most vivid memories was when I took part in one of Dr. King’s marches. We convened in a park in Roxbury, where we would march down Massachusetts Avenue and then turn onto Boylston Street, where King would be standing at the Boston Commons. We were told there would be snipers, that we would be picked off. I was a little nervous.

We didn’t know how many people would show up for King’s speech. As we marched, there was a sizeable group I saw ahead of me and beside me. But then we made the turn onto Boylston Street, which is almost a mile long, and we saw all of humanity. Shoulder to shoulder. Thousands of people. And everyone was singing “We Shall Overcome.” It was an incredible moment.

Apply those moral standards to whatever you do. Is the work you undertake one that will give you a sense of moral integrity, authenticity and, to quote the old Jesuit phrase, a “life lived for others”? 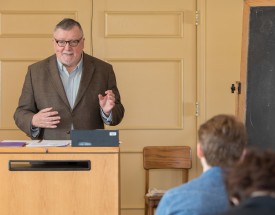 Professor of Religious Studies Royal Rhodes will discuss “Meanings of Death” and more at the annual Kenyon Unique lecture.

Read more about Royal Rhodes.
Join our path forward.
Give To Kenyon
Loading