This year’s Kenyon Unique lecture will feature the professor known for his class on death and who wrote these lines to dedicate the conservation burial ground at the Kokosing Nature Preserve:

Every culture crafts and makes its own
a sacred tale to tame this nameless zone;
as Orpheus found and lost Eurydice,
a mother’s love restored Persephone.
Love called forth from darkness Lazarus,
such love as strong as death will live in us.

Royal W.F. Rhodes, the Donald L. Rogan Professor of Religious Studies, will use poetry to talk about the two most popular classes in his long teaching career at Kenyon on Feb. 24 at 8 p.m. in the Gund Gallery’s Community Foundation Theater. A reception will follow.

Generations of Kenyon students have taken his “Meanings of Death” course, and his “Social Justice: The Ancient and Modern Traditions” with Professor of Sociology George McCarthy is the longest-running co-taught course in College history taught by the same two professors.

“Both classes, even the Social Justice class, deal with life and death issues,” Rhodes said. “All organisms die, but how do we find meaning, purpose and direction in our life?”

“He’s a religious encyclopedia. There’s no question that I’ve asked him that he didn’t know or didn’t know where to look,” Orr said. “And he’s incredibly patient. When you’re a kid coming from an environment where education wasn’t that important, you feel starstruck when you come to Kenyon and meet professors like Professor Rhodes. But he never makes you feel uncomfortable.”

Rhodes joined the Kenyon faculty in 1979 and teaches primarily the history of Christianity. His other interests include liberation theology, religion and the arts, third world religious experience and monasticism in the East and West.

“As my own due date approaches, it gives new context to these things,” he said.

His “Meanings of Death” course explores the symbols, interpretations and practices centering on death in diverse religious traditions, historical periods and cultures. It incorporates religious texts such as the Bible, Buddhist texts and Hindu scriptures; literature such as Plato and Dante; psychological interpretations; and social issues such as AIDS, atomic weapons and ecological threats.

“I tell the students at the beginning of the class that it’s not a therapy class, but invariably it becomes one,” Rhodes said. “The class is really about the languages that have been developed to deal with death.”

The “Social Justice” course examines theories of ethics and social justice from the ancient Hebrew tradition of Torah and the prophets, to New Testament writers Luke and Matthew, to medieval natural law, to modern discussions about social, political and economic justice.

Rhodes said that poetry has helped him to frame these discussions and to make sense of his own health issues. He cited Philip Larkin’s “An Arundel Tomb”:

Time has transfigured them into
Untruth. The stone fidelity
They hardly meant has come to be
Their final blazon, and to prove
Our almost-instinct almost true:
What will survive of us is love.

With McCarthy he co-authored “Eclipse of Justice: Ethics, Economics and the Lost Traditions of American Catholicism.” In 1995 Rhodes published ”The Lion and the Cross: Early Christianity in Victorian Novels,” and in 2015 he curated an exhibit about the 150th anniversary of “Alice’s Adventures in Wonderland” for the Greenslade Special Collections and Archives in Olin Library.

In 1993 Rhodes received the Senior Cup at Kenyon, presented to the person who “had done most for the Senior Class and community,” and in 1994 he received the Trustee Award for Distinguished Teaching.

Rhodes earned a bachelor of divinity degree from the Yale Divinity School in 1971 and a Ph.D. in the study of religion from Harvard University in 1979.

Kenyon Unique features lectures and conversations with distinguished faculty members and Kenyon alumni. The event is streamed live and recorded for a digital library of the Kenyon community. 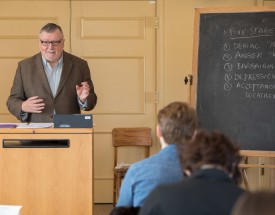 Lessons From a Legend

Professor of Religious Studies Royal Rhodes discusses his life and career prior to his Feb. 24 "Kenyon Unique" lecture.

Read more about Royal Rhodes.
Join our path forward.
Give To Kenyon
Loading