“No matter what, we were going to swim,” Book said.

A poolside lemonade stand set up at the Kenyon Athletic Center’s Steen Aquatic Center was just one feature of the team’s impromptu mock swim meet, held March 13-14 in Gambier. To add to the realism of Kenyon’s “most epic time trial ever,” the coaching staff arranged repurposed banners from previous NCAA meets, a podium for awards presentations, post-swim media interviews and the aforementioned refreshments.

Zoe Toscos ’20 of Fort Wayne, Indiana, livestreamed the event via the team’s Instagram account. “We had almost 400 viewers at one point,” Toscos said. “I know the entire community behind our team was heartbroken about the situation, so it felt nice to connect us to them in any way possible. The love for Kenyon swimming and diving spans so many generations of alumni and family members all across the globe.”

The mock meet made big waves in the swimming world, with online outlet SwimSwam interviewing Book about the experience. “We ended our season in a way we could have never envisioned,” Book said. “But in another way, we ended it exactly as we had always planned: Together.”

The team’s Plan B came together quickly. After Book heard on a local sports station playing on his car radio that the NCAA competitions had been canceled, he knew he had less than 48 hours until Kenyon swimmers would be asked to move off campus and join their peers in completing the rest of the spring semester remotely. He pulled over to the side of the road, turned around and headed back to Kenyon to mourn collectively with his team — and then plan for an alternate meet.

“We spent time grieving,” Book said. “This is a big loss, and we understand this is done for a global health concern, but it doesn’t mean you have to be happy about it,” he told his athletes. “We’ve worked very hard to be in this position, and unfortunately we won’t have the opportunity to see the rewards.”

Besides the pageantry of the mock tournament, the Lords and Ladies time trials also featured some pretty impressive swimming. “The intention was to be together and to just enjoy swimming and competing,” Book said. Team members were allowed to compete in their primary events or in any swims that they wished. Perhaps the freeing nature of knowing there were no official stakes allowed the Kenyon swimmers to perform at their best.

“We had lots of best times; we had people swimming faster than school records, pool records, an NCAA record in one case,” Book said.

Some of those impressive swims were by David Fitch ’21, from Conway, Massachusetts, the leader of the men’s team relay events. “At the end of the day I could have stayed down and sad and thrown a pity party about not getting to compete at nationals, or I could get up, take this opportunity and compete one more time this year for the Lords,” Fitch said. “So I just went to the blocks and gave everything I had.”

Senior Assistant Coach Fernando Rodriguez ’04 said it was an emotional event for the swimmers and coaches, particularly considering how well the teams had performed this season. “This was something that we had been working for all year,” he said. “You never have a guarantee, but we had a very good feeling that we were going to have a good championship meet. But this kind of situation makes you realize — you’ve got to take advantage of every opportunity throughout the year.

Added Book, “We just stayed true to who we were as a team.” 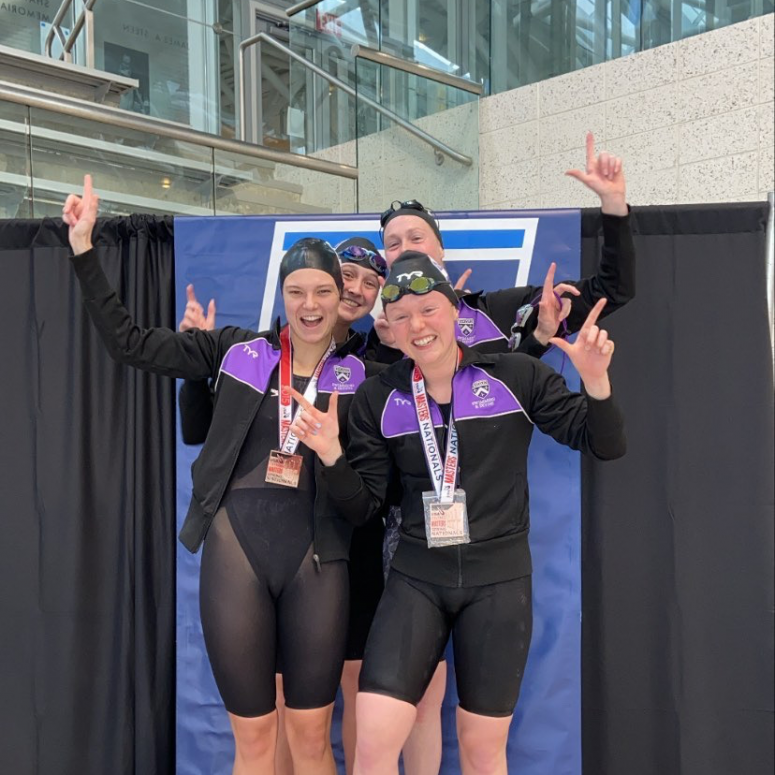