The latest outbreak of the Ebola virus has infected more than 1,700 people and claimed the lives of nearly 1,000 of them. Since March, the disease — which has no known cure — jumped borders from Guinea to Sierra Leone, Liberia and, most recently, Nigeria. While contracting the disease requires direct contact with an infected person, fears of a worldwide epidemic are spreading.

Joan Slonczewski, the Robert A. Oden Jr. Professor of Biology, teaches about Ebola in her virology class. She is also the co-author of Microbiology: An Evolving Science, a textbook for science majors that includes a section on the Ebola virus. She is working on a similar book for allied health majors called Microbiology: The Human Experience that covers such topics as how diseases, including Ebola, are transmitted. In addition, she used an Ebola-like virus in her science fiction novel, Brain Plague, told from the point of view of an intelligent microbial pathogen.

Slonczewski answered questions about the disease and made recommendations for additional reading.

How does Ebola virus work?

It enters your body, through mucous membranes, through touching, through your mouth after direct contact with someone who is infected. Once the virus gets into your body then it enters cells. Then the virus simply reprograms the cells to make more copies of itself. What’s unusual about Ebola virus is it can propagate this way and replicate more virus particles in many kinds of host cells. By contrast, the influenza virus only can attach to certain kinds of cells in your throat; it cannot infect other cells. The Ebola virus can affect many types of tissues. That’s why it’s so devastating.

In addition, Ebola virus blocks the immune system. That allows it to continue propagating because the immune system is hampered from making antibodies. Your body doesn’t know it’s there, so the virus just hits a cell here and there for a while. Eventually viruses hit so many of the cells in the epithelial layer of the blood vessels that the blood vessels become fragile. So they leak. That’s the hemorrhagic part. The secretions that leak out of the blood contain the virus, and they bring it to other tissues. It also brings the virus outside the body. Once it gets outside the body then the virus is very easy to pick up and transmit.

What makes it so infectious?

Because it takes so little of the virus to become infected. The infection dose is less than ten virus particles. The infectious dose is the number of copies of a pathogen you need to pick up to get sick. It’s certainly not very many because some of the health workers that got sick took all the precautions and yet they still acquired it.

Other outbreaks of Ebola have been short-lived. What is different about this one?

It’s taken hold in cities where there is much more contact. And we cannot rule out that this strain of Ebola maybe lasts a little longer on surfaces than the older strains did. The information is evolving all the time.

The World Health Organization recently called the outbreak an international health emergency. What’s the likelihood that we’ll see an outbreak of Ebola virus in the U.S.?

No one really knows that. I think that the medical establishment is saying based on their expertise that an outbreak here is unlikely. They’re trying hard to catch possible cases. But the long incubation period of Ebola (two to 21 days from exposure) is really a concern. And there are parts of this country that lack adequate medical care, and so I think it depends on where it goes. If the virus happens to end up in a part of this country that lacks state-of-the-art medical care and medical attention, then it’s hard for me to see how you could prevent it from escaping.

How can students apply what they learn at Kenyon to keep the outbreak in perspective?

I recommend if anyone wants to know what they can do about the epidemic, the best thing they can do is to donate to Doctors Without Borders because, out of all the groups, they are the most heroic, the most organized and do the most communicating with the outside world. Under their care, as many as 50 percent of victims recover. For months, Doctors without Borders have been warning the world about this epidemic and working to control it.

I’d also like people to think about the broader perspective on viruses. Ebola is one of many pathogens out there. Many other viruses don’t harm the body at all. We’re only aware of the ones that cause a problem. That’s the challenge.

Where else can students go to read more about Ebola virus and this current outbreak?

In 2010, one of my students, Keith Miller ’12 wrote his term paper on Ebola virus. It recently was cited by the group blog BoingBoing as being exceptionally informative about the details for the lay person. For a broader background, a New Yorker article by Michael Specter is worth a read. The World Health Organization has a good fact sheet. 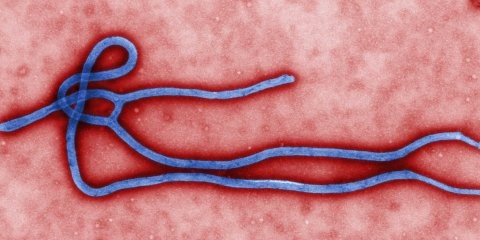