Kenyon is among 19 institutions in the country to be a top producer of both Fulbright U.S. students and Fulbright U.S. scholars in the 2019–20 academic year. The College also is one of the top baccalaureate institutions that produce the most student winners of the fellowship, marking the 15th time Kenyon has appeared on the top-producing student list, published in the Chronicle of Higher Education.

“To be named a top producer of not only Fulbright students, but also scholars, is an extraordinary achievement,” said Thomas Hawks, dean of academic advising and support. “This recognition demonstrates Kenyon’s commitment to global learning, and it is a testament to our faculty’s dedication to engaging themselves and their students in the international community.”

The primary source of funding for the Fulbright Program is an annual appropriation made by Congress to the U.S. Department of State’s Bureau of Educational and Cultural Affairs. More than 2,200 U.S. students and more than 900 U.S. college and university faculty and administrators are awarded Fulbright grants annually. In addition, around 4,000 Fulbright Foreign Students and Visiting Scholars come to the U.S. annually to study, lecture, conduct research or teach their native language.

Kenyon’s latest cohort of Fulbright students and alternates includes six members of the Class of 2019 and a graduate from the class of 2018. They are: 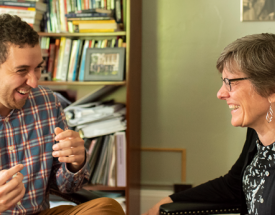 Thanks to hard work, Nick Kaufman ’19 wins a Fulbright grant for research in China.

Learn more about Nick Kaufman.
Join our path forward.
Give To Kenyon
Loading