Editor's Note: Updated as of Nov. 19 to include the complete exhibition schedule.

Latinos are a growing community in the rural area home to Kenyon. A Mexican American family started Mount Vernon’s Fiesta Mexicana restaurant. Other Latinos work on the farms that are the heart of Knox County. A number of professors at Kenyon are from Latin American countries.

Professor of Spanish Clara Román-Odio received a highly competitive $17,000 grant from the nonprofit organization Ohio Humanities to document the experiences of Latinos and Latinas in Knox County and create a bilingual traveling exhibit. The gift for the project, “Latinos in Rural America,” is among the highest level granted by the Columbus, Ohio-based organization for public humanities projects.

Román-Odio, director of Kenyon’s Latino/a Studies concentration, is curious to answer many questions with student researchers this summer: How did the family that runs Fiesta Mexicana grow the business from scratch? What do local Latino children dream about for their futures? How have Latina women, so often agents of social change in their communities, altered their behavior because of their rural surroundings?

“For us, the important values are work, family and faith. These are three major themes of the research,” said Román-Odio, who grew up in Puerto Rico. “How does that manifest in everyday life and the decisions that Latinos make in this particular place?”

She wants to document the history of Latinos who have been recorded as living in Knox County since the beginning of the last century. A demographic database shows that 789 Hispanic people lived in Knox County in 2013, which is about 1.3 percent of the population, Román-Odio said.

While this figure is proportionally small, the county’s Latino population has doubled in the past decade, indicating a steady growth that is likely to continue, she said. “Let’s learn about that history that escapes the history books that are shelved.”

Dunnell, of Montclair, New Jersey, received a Kenyon Summer Scholars stipend to stay on campus to research this summer. She expects the project will help her focus her interests in a career related to gender studies and Latinos in the U.S. “I think it’s important to realize how the things I’m interested in pursuing later in life are happening where I am presently,” she said.

Mota, also majoring in international studies, will be funded as an emerging humanities scholar by the Ohio Humanities grant. Her interest in ethnic enclaves stems partly from growing up in the predominately Mexican neighborhood Pilsen in Chicago and spending seventh grade in a Michigan community that she says was similar to Mount Vernon.

In that year in Michigan, her mother found tortillas at secret stores that sold Mexican products, she said. “I’ve always been interested in how people manage to survive and keep their cultural affinity in places that are so different from where they come from,” said Mota, a member of the student club Adelante that promotes Latin American culture.

The summer researchers will work through communication hubs for Latinos, including Fiesta Mexicana and St. Vincent de Paul Catholic Church, where Mount Vernon Latinos congregate, Román-Odio said. Latinos she has met with to gauge interest in the project are eager to share their stories and hear ideas for improving their children’s future, she said.

The group will consult Professor of Sociology Howard Sacks, director of Kenyon’s Rural Life Center that supports the rural experience in Knox County. Román-Odio said she was inspired by a 1990s Rural Life Center project led by Sacks and Professor of Sociology and Legal Studies Ric Sheffield called “The Community Within: Black Experience in Knox County, Ohio,” which documented two centuries of rural African American life.

As part of the latest project, Kenyon researchers will produce a pamphlet to serve as a primer on Latino culture, history, values and communication norms to help bridge cross-cultural gaps. Román-Odio said Knox County leaders she works with at the United Way and the Health Department embrace the goal of improved interactions with the Latino community, noting that a Kenyon group translated a community survey and distributed copies to Spanish-speaking residents.

At the exhibit starting in December at the Chalmers and Olin libraries, people will see photo banners depicting the Latino experience in Knox County and visit interactive computer stations with video clips and a chance to record their thoughts about the information.

The exhibit will appear afterward at the public library in downtown Mount Vernon before moving to other Ohio locations throughout early 2016, including Ohio State University and the Center for American and World Cultures at Miami University.

The exhibit will be on display at several locations throughout the county before finding a permanent home in Kenyon College's community engagement office. For all locations, the exhibit opening will be from 4:30-7:30 p.m. with brief remarks at 5:30 p.m. 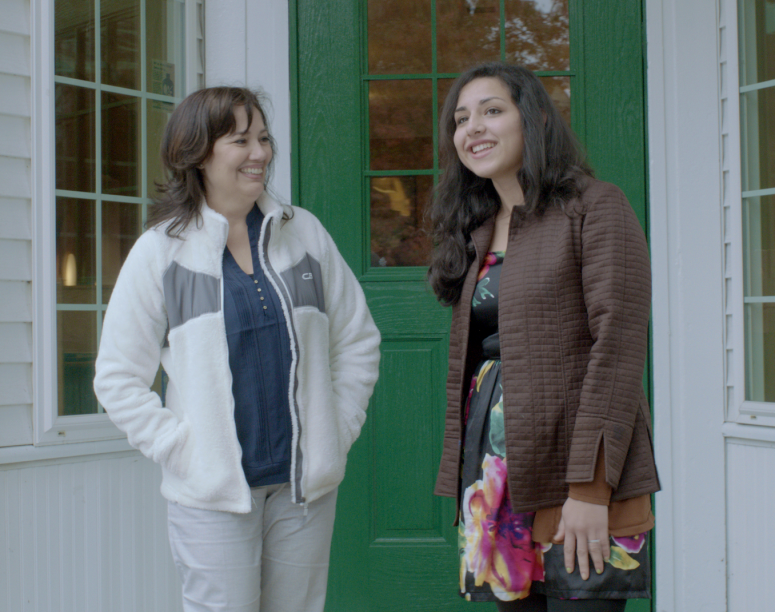