Last Saturday, I rode in the 10th annual Pelotonia, a bike ride benefiting the James Comprehensive Cancer Center at the Ohio State University. For the past seven years, Kenyon has hosted the first-day finish line for the event’s longer routes. Thousands of cyclists make their way from Columbus to Gambier, and many spend the night before tackling a second day of riding early the next morning. Each rider raises funds from family and friends, with 100 percent of the money raised going to support research toward a cure for cancer. So far this year, almost $16 million has been raised, with a total of over $172 million since 2009.

Riding or volunteering for Pelotonia is an amazing experience. Survivors or families of survivors line the roads to cheer on the riders, offering words of encouragement, cold water and even shade for spontaneous rest stops. Many hold up signs giving testament to spouses, parents, grandparents and children whose lives have been saved by researchers at the James — a sight so moving to witness that, a couple of hours in, it becomes hard for me to distinguish tears from sweat running down my face.

Kenyon fielded a team of about 15 riders this year, with many other Kenyon alumni, staff and friends riding with other groups and countless community members volunteering to support the efforts on the Hill. I’d like to thank everyone whose time, energy and sweat (and, on this hot day, everyone sweated — riders and volunteers alike) helped to make this year’s event a success, especially staff from maintenance and our partners with AVI Foodsystems.

One of the things I enjoy about cycling is the opportunity to let my mind wander. Once my legs get into a rhythm, my brain is released to take in the scenery and think freely: memes (#kiki are you riding … a bike?), song fragments (after Drake, the Weezer cover of “Africa” played over and over again in my mind for at least 10 miles) and cataloging to-do lists (a lot to be done before the start of school) eventually give way to new ideas and thinking. And, with about four-and-a-half hours of cycling logged on Saturday, I certainly had a few moments for some powerful reflection.

Much has been said about the remarkable polarization and sense of division that seems to permeate our nation today. Some argue that this is merely a function of the toxic rhetoric driving our current political moment; others point to the challenge of changing demographics in America, that bridging cultural divides becomes more difficult as our nation becomes more diverse; still others say that the real problem is not the increasing diversity, but the way in which we talk about diversity, asserting that celebration of difference through a practice of identity politics deepens rather than heals cultural divides. I’ve read countless articles and opinion pieces about this phenomenon, and I’ve heard, seen and participated in these debates on our campus.

Yet on Saturday afternoon I found myself pedaling in rhythm with thousands of others who made a remarkable sample of our nation’s diversity. The group of riders and volunteers was diverse by age (I am fairly certain I was passed by riders who were more than 30 years younger and more than 20 years older than I am); by ethnicity and national origin; by religion; by socioeconomic class; by any other measure or category. A diverse group, united by Pelotonia’s one goal and working toward a common cause.

We also are living in an era that is marked by skepticism and cynicism about the power of science. Our political leaders reject guidance from scientific expertise when making policy decisions, as if making decisions from one’s gut can produce better results than careful consideration of evidence. In contrast, what brought this diverse group of Pelotonia cyclists and volunteers together, beyond the desire to end cancer, was a belief in the power of knowledge and science to solve problems. Our goal is to end cancer, but the path to that goal runs through scientific research.

And who carries out that research? The James attracts outstanding scientists from across the country and around the world (including, each year, a group of Kenyon students) — an excellent example of how a diverse team, united by skill and expertise, makes the work stronger and better.

If the belief in the power of science to solve a pressing problem brought all of us together, what got us on our bikes — inspired us to challenge ourselves physically for a good cause — was the power of narrative, the stories of those whose lives had been impacted by cancer. Whether told in first person, conveyed through music, visual art or drama, or infused in literature, those narratives deepen our understanding of our own humanity and stir our empathy toward others.

So, as I pedaled toward Gambier, my mind went where it often goes this time of year: to the value of a liberal arts education, and the values that we strive to embody at Kenyon. Narrative ignites the passion of a diverse community that comes together to find solutions to pressing problems — solutions that arise from an evidence-based, analytical approach, drawing upon diverse and interdisciplinary expertise.

I can’t imagine a better way to end the summer and begin a new academic year. 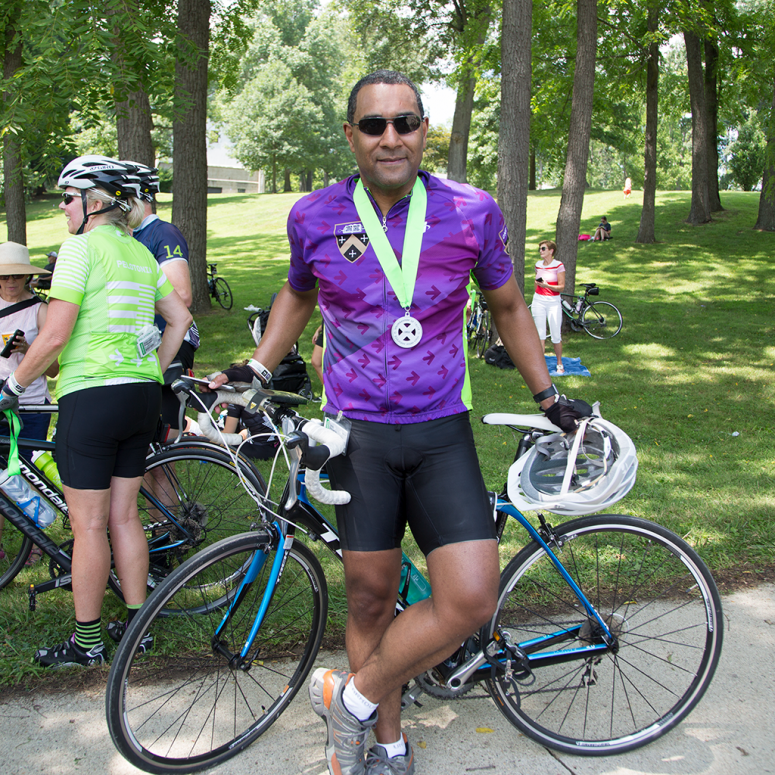