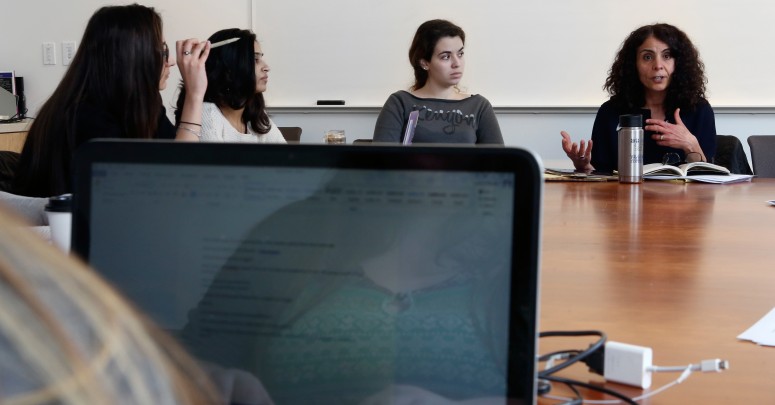 The role of women in public prayers in 1534, the 2015 movie Mustang about five sisters in Turkey, the meaning of certain Arabic words and the legacy of Catherine the Great all came together in a powerful discussion during a three-hour seminar at Kenyon.

The seminar, “Women and Gender in the Modern Middle East,” is not new to Kenyon —Associate Professor of History Nurten Kilic-Schubel has taught it for 15 years. But the sophistication demonstrated by students as they move from one complex subject to the next is a more recent change. “This new generation has a different kind of consciousness,” she said.

This semester, 15 students are analyzing three centuries of historical texts, personal writings, films and images, using gender as a lens to examine the historic dynamics of a region that is changing rapidly in the 21st century.

“I have students in the seminar who have traveled to Morocco, Egypt, Jordan,” Kilic-Schubel said. “I don’t have to do a lot of deconstruction now. The students already have open eyes and open minds. Each year my job is getting easier — or harder, because I have to help them reach the next level.”

Sruthi Rao ’16, an economics and international studies double major from Naperville, Illinois, has taken two years of Arabic and studied for a semester in Morocco. “I am interested in the economic role of women in the Middle East. I’m really focused on poverty — and especially gendered poverty. This class is great at showing how it all intersects,” Rao said.

During a recent class, Kilic-Schubel showed a documentary that highlighted how young people in the Middle East viewed gender issues in 2000. She then turned to a discussion about gender identity, using an image of a 19th century Iranian painting of a romantic couple whose features were not obviously male or female to spark conversation.

“It’s not just a modern thing that people separate genders by visual clues,” Olivia Lloyd ’16, a history major from Corte Madera, California, said during the class. “It seems to go back, people characterizing others by their appearance.”

Lauren Wheeler ’18, an international studies major from Uniontown, Ohio, typifies the way the students bring many disciplines to the table for the seminar. She led a class discussion by asking her classmates to brainstorm different frameworks, such as gender and age, for viewing women’s history, and borrowed upon ideas from a human psychology course she had taken to outline eight different ways to describe gender.

“Feminism is deconstructing the construct of gender. But does that also destabilize the importance of feminism?” Wheeler asked her fellow students. After the class, Wheeler praised Kilic-Schubel for her ability to connect “a lot of issues” in an “interesting way.”

Kilic-Schubel, who taught in Kyrgyzstan in 2010 as a Fulbright scholar, teaches a range of courses related to Central Eurasia and the Middle East in both the pre-modern and modern periods. When she joined Kenyon in 2001, she said the College had few courses about the history of the Islamic world. Now Kenyon has an Islamic Civilization and Cultures concentration that involves many departments, including history, religious studies, political science, international studies, Asian studies and modern languages and literatures.