Why should students study "despicable" views?

Last spring, the media reported widely that Charles Murray, author of the controversial book “The Bell Curve,” was shouted down by students at an elite Northeastern college. The students objected to Murray’s alleged “message of hatred.” Meanwhile, largely unnoticed, students at colleges across the country routinely read assignments from authors such as Hitler or the Marquis de Sade. Such readings are assigned in order for students to understand beliefs and arguments that have shaped human society.

The importance of diverse viewpoints was underscored at Kenyon this year, when the faculty debated a new statement on freedom of expression. A committee of four faculty members discussed at length the role of “academic freedom” for faculty, and how the classroom requires “freedom of expression” for students. We arrived at a faculty resolution that affirms the right of faculty and students to express views “that most members of the College may consider mistaken, dangerous, or even despicable.”

Why is it so important to examine views that a majority of people consider despicable? We can point to various positions that today our community commonly accepts, although just a few years ago, they were outside the realm of serious consideration. For example, in my own field of microbiology, an idea long outside the norm would be the use of fecal bacteria for medical therapy. Until recently, such an idea was unthinkable, even disgusting; but after experimentation and debate, fecal bacteriotherapy is now an established procedure.

An example from the societal realm is the acceptance of same-sex marriage. Only a few decades ago, same-sex relationships were widely despised, even barred by law. Yet today, what was once a minority view has become mainstream. History shows that numerous beliefs we cherish today began as despised minority views at some point in our past history.

This response, though, raises further questions: Does history lead us forever forward? Is progress inevitable, as we continually reevaluate unpopular views? For every “despicable” opinion that proves valuable, how many remain just plain despicable? What happens when the forum of ideas becomes inundated by a rising tide of the despicable? Do we have any reason to believe that the “good” is somehow more likely to emerge from discourse than the despicable? In allowing consideration of the despicable, do we risk losing the good?

Another reason for taking despicable views seriously is to understand the basis of their power and appeal. Suppose a class discusses the concept of authoritarian nationalism, with a view toward understanding how nationalism arises, and why some democratic citizens come to embrace a self-destructive anti-democratic program. In order to take the concept seriously, do we need to allow the possibility that a student may indeed embrace it? Suppose such a student in the class actually embraces an authoritarian program, argues for it, and ultimately joins a political group that we find despicable. Would we consider the class a success because it allowed thorough consideration of a full range of views, including the despicable? Or is the class a failure because, despite enlightened consideration, a student actually chose a despicable path? If a class were guaranteed to preclude the choice of authoritarian programs, then why bother to even study the concept as a serious choice? Why not just memorize the reasons why it’s bad?

Another question about freedom of expression in the classroom has to do with the power differential. Faculty are accustomed to the concept of academic freedom, in which experts have the right to present controversial views within the realm of their scholarly expertise. In academia, we generally see the faculty member defending their expression from pushback by someone with higher administrative authority. For example, a college administrator might attempt to discipline a scholar who publishes on social media an opinion deemed offensive to the community. In this case, the scholar requires protection from the administrator’s institutional power.

By contrast, the classroom presents the opposite power structure, in which the professor has the power to evaluate the student and assign grades. Suppose a student raises objection to material the professor assigns as readings required to pass a given course, perhaps a required course for the major. In this case, whose position requires protection? Does the student’s “freedom of expression” extend to objecting to assigned material? Or does the student give up the right to object by enrolling in the course or declaring a major?

At Kenyon this year, the questions raised by our faculty statement will now receive input from students and staff through our campus Senate and other committees. The questions live on in my own classroom, as students confront new dilemmas of human gene editing (should we fix embryos?) and climate change (should we fix our planet?). Every view we express will be despised by someone. Members of Kenyon’s faculty voted unanimously to approve a statement affirming their commitment to freedom of expression for students and faculty. 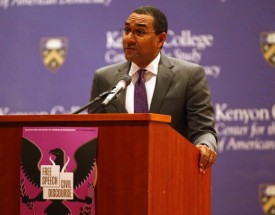 Disruption in the Marketplace of Ideas

Tension between the concepts of free speech and civility on college campuses can accelerate societal progress, writes President Sean Decatur.