Evolution in humans takes thousands of years but, in bacteria, the changes can come more quickly. It’s the changes that occur in the reproduction of Escherichia coli bacteria that Joan Slonczewski, professor of biology, is studying with her nearly $500,000 grant from the National Science Foundation.

The project explores how E. coli, a bacteria commonly found in the digestive tract of warm-blooded animals, reacts to extreme pH levels.  Slonczewski and the students working with her have watched the growth of the bacteria through more than 2,000 generations– and they’re already starting to see adaptations.

The most exciting part of the research, Slonczewski says, is the sense of the unknown.  “We can see evolution happening. We can see the bacteria multiplying under the microscope.”

Just as exciting, she says, is giving students the opportunity to work with her on the project.

Slonczewski consistently has been funded by the NSF for 30 years, allowing students to work with her in the laboratory. Currently, she oversees 12 students, about half of whom she recruits from the incoming first-year class. She starts by teaching them basic fundamentals of running a lab such as maintaining sterile equipment. As they progress at Kenyon, their work becomes more advanced into their own research projects.

“They become a real laboratory community,” Slonczewski said of her students who enjoy socializing and attending professional meetings together, as well as keeping up with one another after graduation on a Facebook page called “Bacteria Lab Kenyon.”

In addition to her teaching and research, Slonczewski is an award-winning science fiction writer, having penned such titles as Brain Plague and A Door into Ocean.

It’s possible, she said, that the research she’s working on with her latest grant will show up in her next book. Her latest novel, The Highest Frontier, features an alien species that evolves very quickly – not unlike the E. coli she’s studying now.

“I write a lot about evolution,” she said. 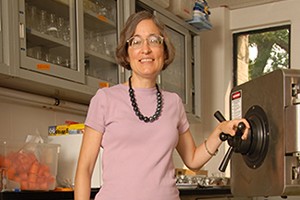