As part of Founders’ Day, the College awarded Middle Path Medals as well as a new award for faculty advising.

This year’s Middle Path Medal recipients are Liz Forman ’73, retired senior associate director of admissions, and Jane Martindell, retired dean for academic advising and support. The medals are given to people who have made a significant contribution, either as an employee or volunteer, to the College, community or county.

Forman was a member of the inaugural class of Kenyon’s short-lived Coordinate College for Women, receiving her degree in history. She returned to her alma mater in the early 1980s as an administrator with the Kenyon Festival Theater before taking a number of administrative jobs with the College. In 1988, she was named acting registrar, then joined Kenyon’s admissions staff in 1994. She also has been an instructor at the Kenyon Review Young Writers Workshop and an elected member of the Gambier Village Council.

Jane Martindell joined Kenyon in 1997, after more than 25 years working at other higher education institutions. As dean for academic advising and support, she won popularity with, and admiration from, students and faculty members alike. During her final two years at Kenyon, she worked part time as director of fellowships and awards.

In addition to the Middle Path Medals, the first Faculty Advising Award was given to the professor who showed commitment, dedication and energy to academic advising for Kenyon students. The award went to Karen Hicks, associate professor of biology.

She joined Kenyon in 1999 and teaches courses in genetics and developmental biology, as well as introductory lecture and lab classes. She was recognized for her exemplary leadership in faculty advising.

Also recognized during the Founders’ Day ceremony were the newest members of Beta of Ohio, Kenyon’s Phi Beta Kappa honor society chapter, and the recipients of Philander Chase Medals for Distinguished Service for 25 years teaching at the College, including Jennifer Clarvoe, professor of English; Brad Hartlaub, associate provost and professor of mathematics and statistics; Steve Van Holde, associate professor of political science; and Harry Itagaki, professor of biology.

Two of the 2014 recipients of Philander Chase Medals who were on sabbatical during last year’s ceremony also were recognized: Mary Jane Cowles, professor of French, and Ruth Dunnell, the James P. Storer Professor of Asian History.

Sarah Heidt '97, associate professor of English, gave this year's traditional Founders' Day address, titled "Beginning Again, All Over Again." "I do have a sense of the opportunity this ceremony affords us every year," she said. "Just as we reach the moment in the semester when it might be feeling as though we will all be working forever, never coming to the end of our labors — just as we reach the moment when the startlingly intense pace of activity on this Hill might be coming to feel routine or normal — we very deliberately call a halt to nearly everything, gather in Rosse Hall, and pause to contemplate this place, and our place in it, in a longer view than we’re able to do in the midst of our daily lives." 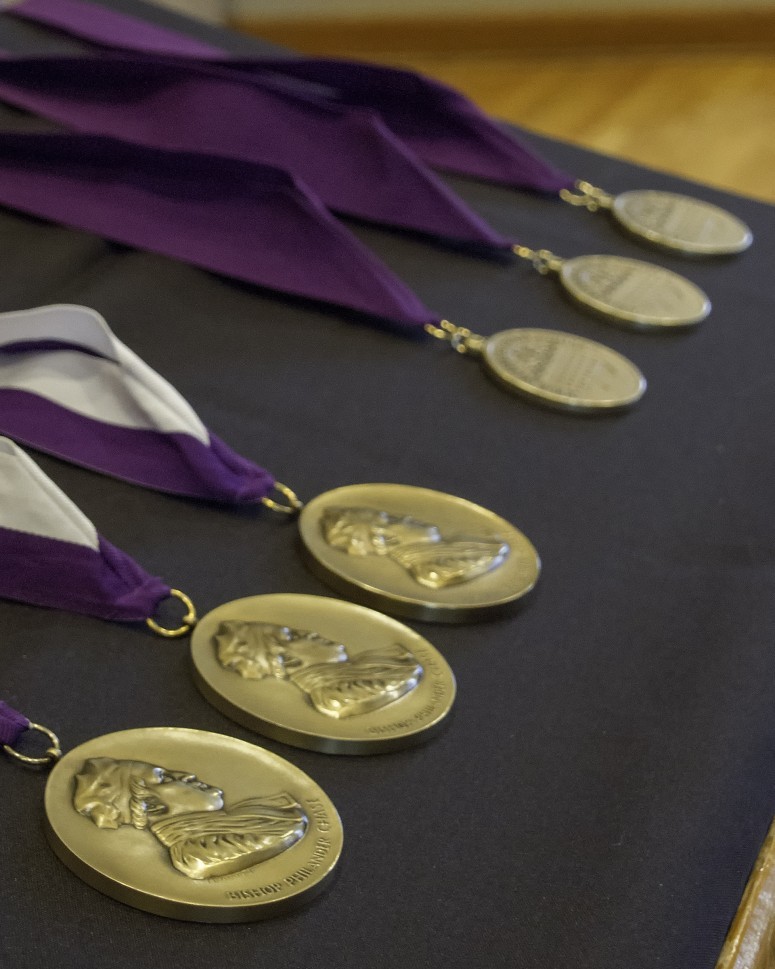