The 190th Commencement was held Saturday, May 19, at 10:30 a.m. Click here to watch recorded video of the ceremony.

Kenyon’s 190th Commencement ceremony will feature an acclaimed statistician and writer, four retiring faculty with a combined total of more than 100 years of service to the College, and the 400-plus members of the Class of 2018, who will parade down Middle Path one last time before taking themselves and their diplomas out into the world.

The ceremony is scheduled to be held on the lawn between two of the College’s oldest academic buildings, Ascension Hall and Samuel Mather Hall, on Saturday, May 19, at 10:30 a.m.

Acclaimed statistician and writer Nate Silver will deliver the Commencement address. Silver, the founder and editor of the website FiveThirtyEight (named for the number of members in the U.S. Electoral College), has gained fame for his exceptionally accurate and occasionally counterintuitive political prognostications, especially his predictions for the 2008 and 2012 presidential elections.

Prior to his work with FiveThirtyEight, Silver was known for his prowess with baseball analytics. In addition to writing for Baseball Prospectus, he developed the Player Empirical Comparison and Optimization Test Algorithm (PECOTA), an acclaimed forecasting system that predicts player and team performances.

Silver is the author of a series of books on baseball statistics as well as the 2012 best-seller “The Signal and the Noise: Why So Many Predictions Fail — But Some Don’t.” Almost uniformly praised by critics, the book was named to a list of the 10 best nonfiction works of the year by the Wall Street Journal. He earned his bachelor’s degree in economics from the University of Chicago and will receive an honorary doctorate in humane letters from Kenyon College.

The College will precede its Commencement celebration with a Baccalaureate service Friday, May 18, at 1:30 p.m. on Samuel Mather lawn. The service features readings of academic and spiritual texts chosen and presented by a diverse group of seniors. Following the service, the Class of 2018 will gather on the steps of Rosse Hall for the Senior Sing, a beloved Kenyon tradition.

Associate Professor of English Sarah Heidt, a 1997 Kenyon graduate, was chosen by the graduating class to give this year’s Baccalaureate address. An expert in 19th-century British culture and literature, Heidt joined the faculty in 2004 and won the Trustee Teaching Excellence Award in 2010.

In the case of inclement weather, events will be held at the Kenyon Athletic Center. Tickets are not required for the Baccalaureate or Commencement ceremonies, which will be livestreamed. 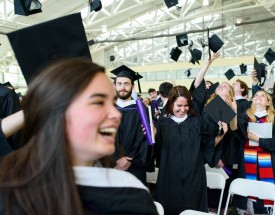 Kenyon’s 190th Commencement ceremony for the Class of 2018 will be held on Saturday, May 19. Here is a sampling of where members of the Class of 2018 are headed.

Read about what the Class of 2018 will do with their Kenyon diplomas.
Join our path forward.
Give To Kenyon
Loading