As soon as the Kenyon Bookstore reopened in its former location in the south end of Farr Hall last Friday, March 16, students returning from spring break filled its study tables and stuffed chairs.

“I thought it would be noisier because of the new open space, but it’s really nice. It’s a really good place to study,” said Elizabeth Lemire ’21 of New Hartford, New York, working on her laptop in the textbook section.

The Kenyon Bookstore is the nation’s longest continuously operating college bookstore and the third-oldest bookstore of any kind in America. Lemire remembers a previous incarnation of this community gathering place because she visited as an eight-year-old — her parents are David Lemire ’91 and Elizabeth Lemire ’90.

“There was a section with children’s books, and I just sat and read and read. I remember that I sat on the couches and read a lot,” the first-year student said.

There is still a children’s section in the renovated space. There is also more natural lighting, a new facade, second floor offices for the College’s information technology staff, a sprinkler system and an elevator.

The bookstore’s renovation is part of a phased downtown revitalization plan that has already improved access to Middle Path, added modern apartment residences for students and increased modern retail space, such as the new Village Market location on Chase Avenue. Last fall the bookstore was temporarily located in the north end of Farr Hall, in the space the Village Market formerly occupied.

President Sean Decatur and Bookstore General Manager Angus MacDonell cut the ribbon at a grand opening ceremony on Thursday, March 22. “The bookstore has always been more than a place to buy books and Kenyon gear. It’s also a place for us to hang out and read and come together as a community,” Decatur said.

The next stage of the downtown revitalization comes when crews demolish the northern two-thirds of Farr Hall to make way for three new Gaskin Avenue retail buildings. Construction of those structures will continue into the summer; one of those new spaces is for the return of the Gambier Deli, and several others will be used as temporary study areas during the construction of the Kenyon Commons library.

For now, George Goldman ’20 of Sharon, Massachusetts, is happy with the study tables at the bookstore. “These are good study spaces. The ambiance feels very similar to the old bookstore,” he said. “I expected it to feel different because of the colors and the space, but it feels very similar, and I’m happy about that.” 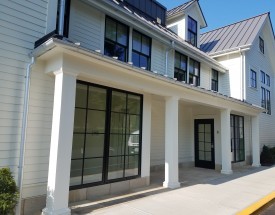 Read more about the project.

Photos of the New Bookstore 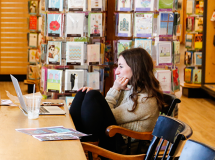 Students study in the reopened bookstore. (Photo by Cameron Peters '20) The children's section in the new bookstore. (Photo by Cameron Peters '20) 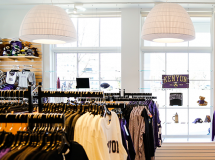 The entrance to the new bookstore. (Photo by Cameron Peters '20) The new facade of the Kenyon Bookstore. An overview of the new Kenyon Bookstore. The apparel section of the new Kenyon Bookstore.