President Sean Decatur was one of dozens of people to check out the Gambier Deli menu when the restaurant reopened January 3. He was relieved to find #63, “Bacon, Anyone?”

“It was excellent. That was my usual, and it’s nice to see that my usual is still here,” Decatur said. “It was also nice to see such a good crowd on opening day.”

The deli suspended operations for more than a year as part of a multi-phase project in downtown Gambier that has renovated the Kenyon College Bookstore, moved the Village Market to a modern space and replaced Farr Hall with new retail and student apartment spaces.

Co-owner Jeanne Poland said, “It’s been a good day, but it’s quite a transition from being down for so long. It’s nice to see the people from around town. It was very flattering to hear from people their thoughts about how they missed us.”

Joseph Adler, professor emeritus of Asian studies and religious studies, went regularly to the deli in its Farr Hall location. “I’m really glad they were able to hold out for a year,” he said. “The chili today is excellent.”

The same day people double-checked the deli’s menu, workers moved furniture into the apartments above the deli to prepare them for students. The 34 beds in Farr have been traded for eight apartments in the new Unity House behind the deli, eight in the adjacent Snowden Multicultural Center, 12 above the Village Market and 20 above the three new retail buildings on Gaskin Avenue.

Two of the retail spaces will be used for study space while the Kenyon Commons library is being built. A lower level space that faces Unity and Snowden will soon open as Chilitos Fresh Mex and Margaritas, a venture by José Avalos, owner of two Fiesta Mexicana restaurants in Mount Vernon. Another lower level space will be the new home of student radio station WKCO.

Mark Kohlman, chief business officer, said, “I am happy that the center of the village will get back to normal operations when the students get back. It has been a long process, and people have been very patient. It is time for everyone to enjoy the new spaces.”

Many customers remarked on how large windows make the new Gambier Deli much brighter than its previous home in Farr Hall. A piece of the old cement hall survives: a Colonial Revival door frame with Farr’s street address hangs on the deli’s wall.

One customer never knew the old space: the deli was already closed when Graham Ball ’21 came to Gambier as a first-year student. The physics major from Cleveland tried the new deli on his way to joining the Chasers for their winter concert tour. He ordered #81, “Ray’s BBQ Chicken.”

“The food met the expectations that the older students had told me,” he said. “The best thing about the deli being open again is that it’s another place to meet with friends and hang out that’s a little bit off campus.”

Poland said, “I really didn’t think we’d have this many people come in on the first day back. I’m shocked that we had this many, but it’s a wonderful thing.” The exterior of the new deli. 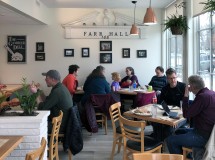 A shot of the Deli interior A shot of where customers place and pick up their orders 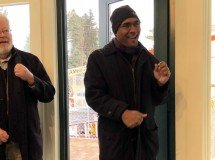