The 21st alumna in our series is Nandi Plunkett Levine ’11. Originally from Williamstown, Massachusetts, she was a music major and anthropology minor at Kenyon, and now lives in New York’s Hudson Valley with her husband, Zach. Plunkett Levine has performed as part of the band Pinegrove and as a solo artist under the name Half Waif. She has performed behind NPR’s Tiny Desk, and the New Yorker has reviewed her music as “globe-twirling prism pop in search of a home.”

I’m self-employed in a creative field, so I’m constantly seeking that balance between structure and spontaneity. When I’m not on tour, I try to develop a routine that allows for flexibility within it. My mornings are email- and business- (and coffee-) oriented. My afternoons are my most fertile creative time, so I try to get myself into my music room even if I’m not feeling inspired, just to work that muscle. You never know what ideas will come your way when you’ve laid the trap and are open to receiving them.

I was 14 when I started calling myself a songwriter, though I’d been making up songs since I was much younger. Giving myself that identity was a stake in the ground at a time when everything else felt tenuous and out of my control. At first, writing songs was not so much about reaching out to others, but a way to reach deeper into myself. Since then, I’ve discovered the power of being vulnerable in a public space. Sharing elements of the human experience eliminates boundaries and brings us closer together, which makes concert venues important spaces for activism and positive change.

Many, many people, but one who stands out is [former Assistant Professor of Music] Victoria Malawey. She was assigned to me as my advisor freshman year, and then became my senior advisor, bringing it full circle. I remember being amazed when she brought in Björk and Radiohead tracks to teach meter, seamlessly drawing connections between contemporary music and classical structures, which had a big impact on my own music and the way I approach combining genres and styles. She was also a proponent of using “big paper for big ideas,” a concept I’ve returned to on many projects. It’s a way to face the unknown and take the first step forward with confidence and intention.

An older musician friend told me early on, “If you want this to be your career, it has to be slow growth.” Especially in the music industry, especially in your 20s, there is a ton of pressure for things to pop off really quickly. And for some people, that happens and it works for them. But for most, honing your craft and getting good takes time. And if you want this to be sustainable, you have to build a foundation that will support you in the long run. I want to keep making music for the rest of my life. And in relinquishing myself to the ethos of slow growth, I’m enjoying the experience of seeing my skills expand as I come up with new ways to interpret the world around me.

I’ve come to recognize more and more that life is long, and, as Annie Dillard says so beautifully, “How we spend our days is, of course, how we spend our lives.” I’ve tried to be more deliberate with how I spend my time, focusing less on abstract notions of success and more on day-to-day markers of fulfillment: experiencing the joy of creating, establishing meaningful connections with others, and spending a lot of time in nature, which is our greatest teacher.

Read about the previous woman in our series: Jen Judson ’04

Read about the next woman in our series: Samie Falvey ’96 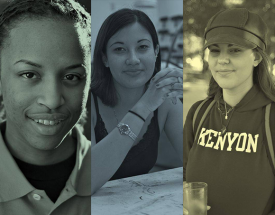