The 20th alumna in our series is Jen Judson ’04. She is the land warfare reporter at Defense News, a global website and magazine based in Washington, D.C., covering the intersection of politics, business and technology of defense. A history major at Kenyon, Judson went on to earn a master’s degree in print journalism at Boston University. She is also the chair of the board of governors at the National Press Club.

I think my life has only become more and more hectic as I begin raising a family (I’ll have two boys under two in April) and balancing my career, but one thing I’ve learned is that the more I have to do, the better I am at managing my time and staying on top of things. I make to-do lists and schedules that I try to stick to in my professional life and personal life. I also use an app on my phone that keeps me focused for periods of time with breaks worked in. I’m really productive when I follow it. I’ve always been deadline-oriented, but the catch is that I’m definitely a procrastinator, which means I’m often hammering something out very close to deadline. I did this with papers in college; I think I was notorious for starting a 20-page paper the night before its due date at Kenyon. Being a journalist is a perfect match for that. I work well under pressure.

I think I’m still working toward figuring out what that power is, but I get glimpses of it at times. When I uncover something in my reporting that helps decision makers, I get a true sense of how influential the media can be. I broke a big story a while back that led to a major congressional review and added more oversight to an agency. That felt so powerful to know my work got the attention of Congress, resulted in change for the better and kept a government agency accountable. I continue to seek out those stories. They are so hard to get, but when you get them, you know you’ve served the public well. Part of that power comes from being able to read people and relate to them in an honest and fair way in order to get what you need for a story. And I know that, at a basic level, my power is writing a clear and accurate rough draft of history.

I really struggled to pick a major when I was at Kenyon. There were too many inspiring professors in every department. Ultimately I settled on history and thought I wanted to be a lawyer. I’ve been good at arguing since I was a kid; just ask my dad. I spent four years after graduation working at law firms, but quickly became disenchanted with the profession. I revisited why I loved my history courses, and that led me to realize that I wanted to be a reporter. I wanted to help write history for future generations, and having a front row seat to history is exciting. I love research, talking to people about their experiences and their knowledge and conveying that in my coverage.

I think that means my inspiration is all the history professors at Kenyon who helped me discover I loved history in the first place.

I also think Kenyon prepared me to be a good analytical thinker, and while my job isn’t to take sides or make conclusions, I use those skills every day to pull the answers I need from interviews, to ask the smart questions and to make sure all sides are fairly represented in my coverage. Sometimes asking the right question in an interview is the difference between walking away with a major story or coming back to my desk with nothing.

I’m not sure where I first heard it, but that phrase “don’t reject them, let them reject you” taught me to just go for it. For example, I applied for jobs I didn’t think I’d get and got them. What if I’d never sent in my resume thinking there’s no way I’d get them? Where would I be now? My philosophy for a while has been “what the hell, it doesn’t hurt to try.”

I also love the quote from Eleanor Roosevelt: “Do one thing every day that scares you.” It forces me to step outside of my comfort zone. I don’t think I would have ever ended up on a Black Hawk helicopter in the middle of an air assault exercise over Poland with the 173rd Airborne Brigade or watched hundreds of paratroopers land in the middle of an old Soviet air base in Bulgaria if I hadn’t pushed myself to get there.

I can’t think of a time where I’ve been successful by staying in my comfort zone. If it makes me nervous, I know I need to do it.

I’m probably more cynical and frustrated, but that drives me. I entered journalism during a crappy economy and it was depressing to see the decline of revered newsrooms around the country as I looked to start my career. Now it’s even worse. The media is under attack by the President of the United States himself. I don’t think I could have imagined the level of hatred for my profession that has been stirred up in the past several years and that has resulted in tragic events like the newsroom shooting at the Annapolis Gazette. Yet, like the reporters at the Gazette who still “put out a damn paper,” this kind of environment motivates me to keep doing what I’m doing and to continue to try to do it better. Leaders need to be held accountable, and the media plays a very important part in that, more so now than ever.

Read about the previous woman in our series: Leslie Martin ’14

Read about the next woman in our series: Nandi Plunkett Levine ’11 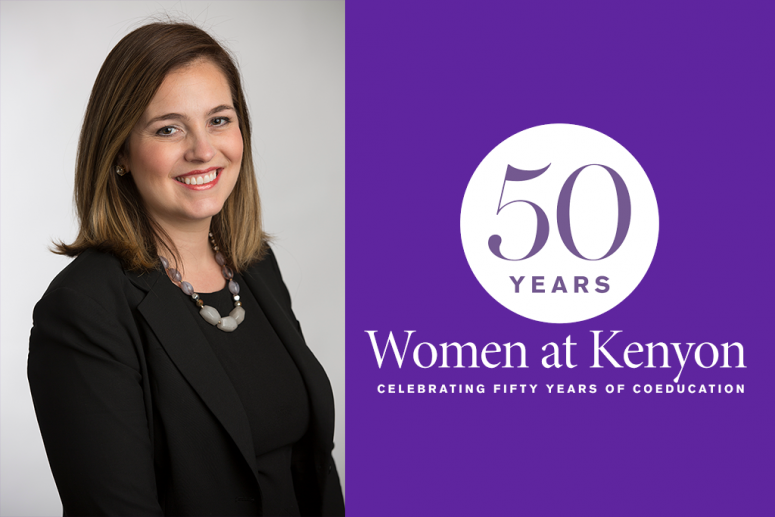