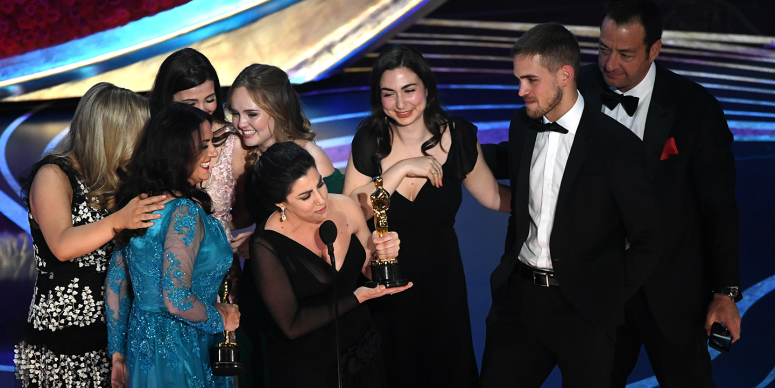 In 2019, millions of people watched as Ruby Schiff ’21, an executive producer of the Netflix documentary “Period. End of Sentence,” became the second Kenyon woman in as many years to ascend the Oscars stage (above). She was one of several Kenyon community members who grabbed headlines this year. Here, in no particular order, are 10 Kenyon newsmakers worth your attention. Two Kenyon students approached an important issue — access to menstrual products — in very different ways. After starting The Pad Project with a group of high school classmates, Schiff helped produce a documentary that examined the stigma and lack of education surrounding menstruation in a rural Indian village. “Period. End of Sentence,” which is available on Netflix, was named best short documentary at the 91st Academy Awards. “I can't believe a film about menstruation just won an Oscar,” said director Rayka Zehtabchi, who was joined on stage by her team, including Schiff, to accept the award. Schiff’s accomplishment was covered by the Columbus Dispatch both before and after Oscars night.

Sarah Groustra shone light on a similar issue in her native town of Brookline, Massachusetts, when she wrote an opinion column for her high school newspaper about the continuing stigma around menstruation. Town officials responded by providing free menstrual products in public restrooms — part of a movement towards “menstrual equity” and a reframing of hygiene products as necessities instead of luxuries. Groustra received attention from the Boston Globe and NPR affiliate WBUR. Although he’s been an immigration activist for years, Marco Saavedra surged into the headlines again this fall, as his own asylum case was heard before a federal judge in New York City. Saavedra, who has lived in the U.S. as an undocumented immigrant ever since his family moved from Mexico when he was 3 years old, was profiled by New York magazine. His story also appeared in the New York Times, and local news station WABC interviewed Saavedra live from Manhattan’s Federal Plaza. In the background, members of the Kenyon community can be seen protesting in support of Saavedra; the Kenyon Collegian reported on a group of students who traveled overnight from Gambier to attend the hearing, while Jodi Ann Wang ’20 provided a first-person account. A verdict in Saavedra’s case is expected in early 2020. Caitlin Horrocks, long a successful essayist and short story writer, has turned her attention to the novel. “The Vexations,” which examines the life of French composer Erik Satie, is her debut in the form, and what a debut it has been: “The Vexations” earned a place on the Wall Street Journal’s list of the best books of 2019, which described it as “delectably captur[ing] the eccentric, obnoxious avant-garde composer Erik Satie, as well as the squalid glory of his bohemian Paris.” It even caught the eye of none other than Oprah, who named it one of “10 July Books You Won’t Be Able To Put Down.” Further coverage can be found in the New York Times, Washington Post and NPR. 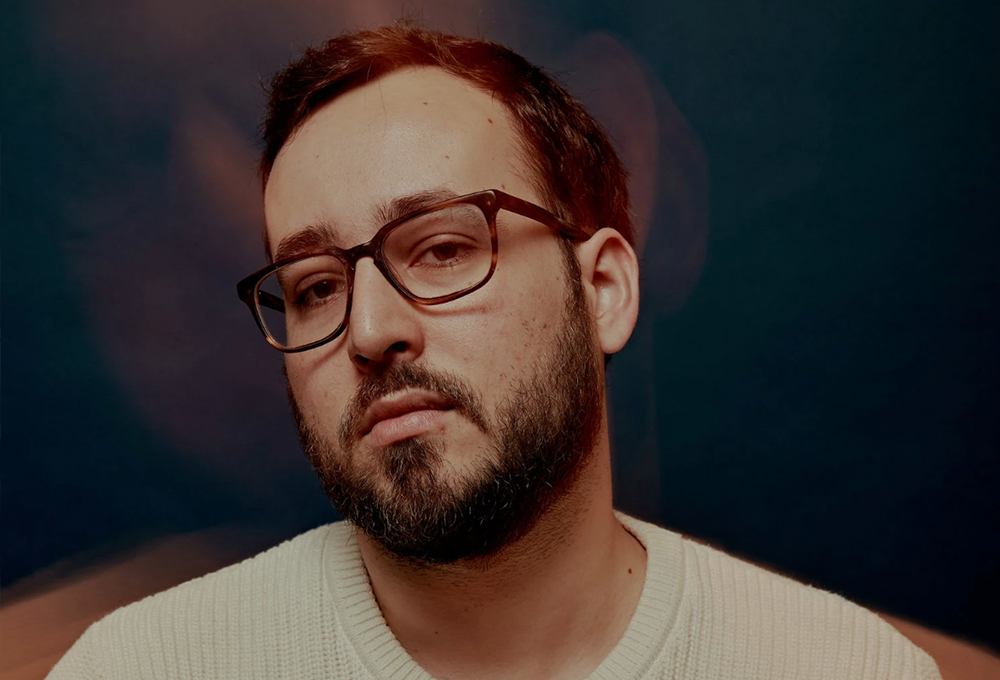 Something about the play “Heroes of the Fourth Turning,” by Will Arbery, struck a chord when it premiered, with Vox analyzing how it became “one of the fall’s buzziest plays” and the New Yorker calling it “richly allusive.” Maybe it was the unexpected subject matter for New York theater — ultraconservative Christian intellectualism — that got it selected as a critic’s pick by New York Times reviewers. The Times also interviewed Arbery about how his own upbringing, as the son of academics at a small Wyoming Catholic college, inspired the play, with Arbery saying that asking audience members to sit with and listen to characters with sharply divergent beliefs is “a radical act.” The off-Broadway production was extended twice before closing in November, and earned a spot on best of the year lists in the New York Times, New York magazine’s Vulture and Time Out New York. “To the continuing debate on the art of attracting a mate, Allison Joseph offers this frisky pantoum,” writes author Rita Dove in selecting Joseph’s poem “Flirtation” for the New York Times Magazine. Calling the pantoum form, a type of poem originating in Malaysian oral tradition, “hellish to get right but heaven when it clicks, as this one does,” Dove, the 2018 winner of the Kenyon Review Award for Literary Achievement, praises Joseph’s lines such as “My shoes of patent leather / shine brighter than my skin. / I move, quick as new weather, / to shed the dress I’m in.” Additionally, Joseph, who serves as a professor of English at Southern Illinois University Carbondale, was nominated this year for an NAACP Image Award, a distinguished honor that highlights talented authors and entertainers of color. He may not be a student or graduate of Kenyon, but Moxie, a nondescript black cat with a white patch on his chest and a green collar, is a ubiquitous member of the Kenyon community. Profiled by the Kenyon Collegian for his habit of jumping up on students backpacks and sneaking into unlocked buildings, this fearless feline even caught the eye of the Atlantic’s Alia Wong, who called him “the cat with a campus wrapped around his paw.” Although Moxie has an official owner and a permanent home, his many friends across Gambier pitch in to keep an eye on the tiny prowling panther, chronicling his adventures with photos on the “Where’s Moxie @ Kenyon” Facebook page. 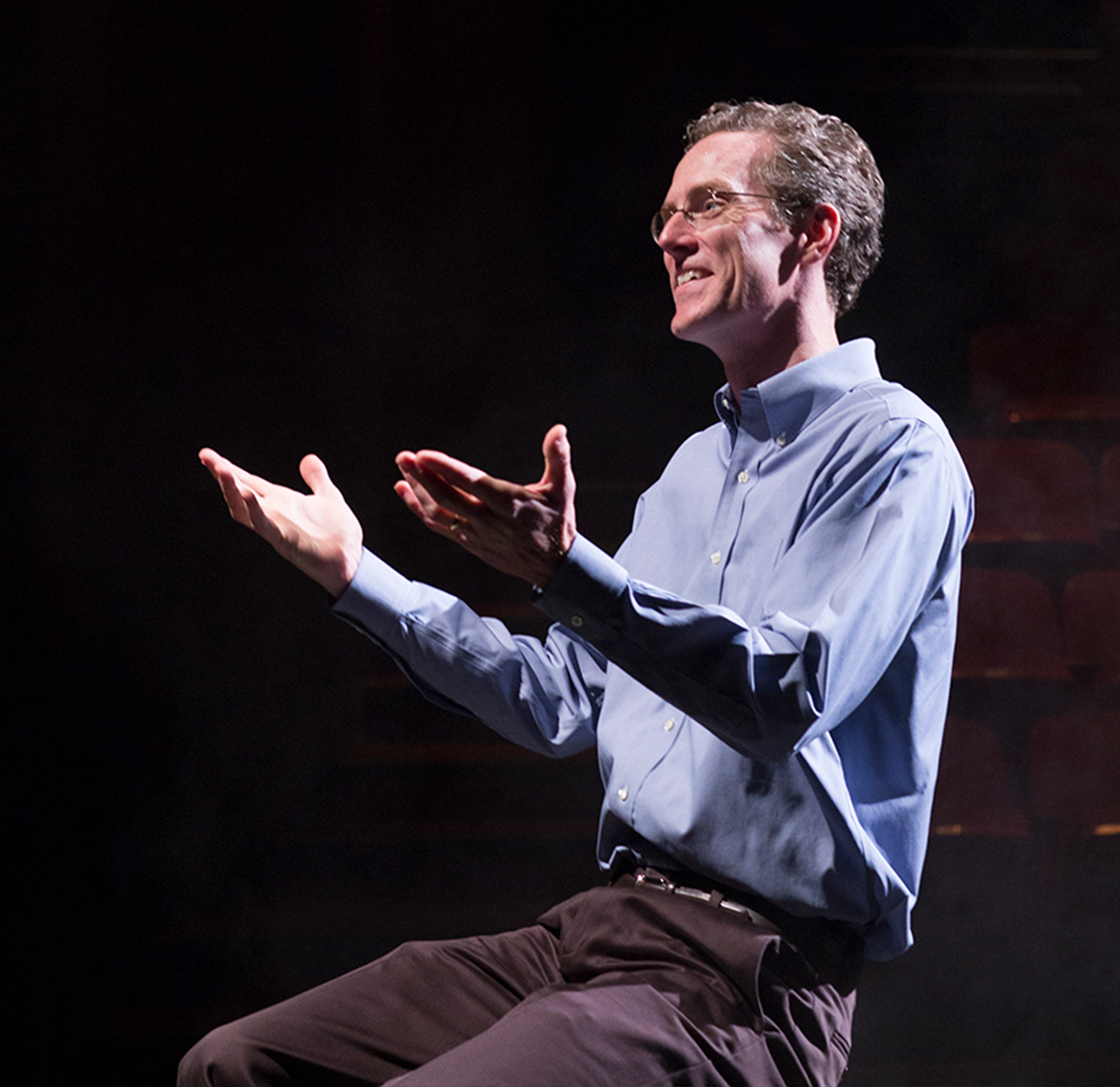 How valuable is Facebook to its 2 billion users, and how can you measure the value of the site when access is free? Professor of Economics Jay Corrigan and other researchers pooled their work and expertise to answer these questions. Using a series of auctions — in which people were actually paid to close their accounts — they found that Facebook users would require an average of more than $1,000 to deactivate their account for one year. The study, which was published in PLOS ONE, earned international media attention with coverage in the Washington Post, Vice News, ABC News and the BBC. Corrigan wrote: “Concerns about how much bad Facebook has introduced into the world, though justified, should be balanced against the good that Facebook produces in the form of sharing photos, playing games, keeping up with the news and connecting with classmates and clients.” Although a world where cancer is curable or even preventable may seem far-fetched, thousands of scientists have dedicated their lives and careers to the research that may make this possible. One of them is Alexandra White, head of the environment and cancer epidemiology group at the National Institute of Environmental Health Sciences. She authored a new report that found a link between hair dyes and straighteners and an increased risk of breast cancer in black women. “We want women to have this information and take it into account in their lifestyle decisions, but to keep in mind that the risks associated with these are small,” White said in the New York Times. She also appeared on NBC Nightly News to discuss the study. During a year in which Mister Rogers had a serious pop culture moment, thanks in part to Tom Hanks’ portrayal of him in the buzzed-about film “A Beautiful Day in the Neighborhood,” Chris Loggins’ work on a popular children’s program resonated with viewers and critics alike. Loggins, who grew up mesmerized by the Land of Make Believe, received a Daytime Emmy for the Fred Rogers Production “Daniel Tiger’s Neighborhood.” The PBS series teaches its preschool-aged viewers school and life skills through imagination, creativity and music. “‘Daniel Tiger’s Neighborhood’ features ‘strategy’ songs in each episode,” Loggins told the Pittsburgh Tribune-Review. “One, adapted from Fred Rogers’ ‘What do you do with the mad that you feel,’ helps children with their feelings through lyrics including, ‘When you feel so mad that you want to roar, take a deep breath and count to four.’” After helping authorities capture con artist Anna “Delvey” Sorokin in 2017, Rachel Williams testified against Sorokin when she stood trial on charges of grand larceny, theft and fraud in one of 2019’s most closely watched legal dramas. “I wish I had never met Anna,” Rolling Stone reported Williams saying on the witness stand in April, as the New York Times chronicled “7 Bizarre Highlights” from the trial. Although Sorokin was found not guilty on the count relating to swindling Williams out of $60,000, the fake heiress of New York City ended up being sentenced in May to four to 12 years in prison, and Williams told her whole story in her first book, “My Friend Anna,” released in July. The memoir garnered reviews in the New York Times, the Guardian and Bloomberg, and Williams even appeared on Good Morning America. 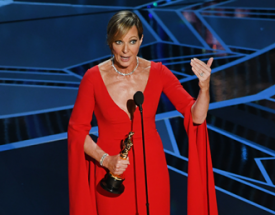 From D.C. politicos to Hollywood stars, Kenyon alumni made news around the world in 2018.

Read more about the 2018 Kenyon newsmakers.
Join our path forward.
Give To Kenyon
Loading