Songwriter Jacob Yandura ’09 draws closer to his goal of composing a Broadway musical when the off-Broadway production of Wringer opens April 8 for a 10-day run at New York City Children’s Theater.

“To have an off-Broadway production at the age of 28 is exciting,” Yandura said. “It is a big deal. The New York Times will see it. I’m really looking forward to what happens. The end goal is to have a Broadway show. Who knows when that is going to happen? But it is something I’ve wanted since I was a kid.”

Yandura was born in Warren, Ohio, and his parents moved to Dublin, Ohio, when he was in the sixth grade in pursuit of an education that could better advance his talent. “I started playing the piano at age 5 or 6 and began writing music as soon as I learned to notate,” he said. “I was the kid always making a theater in the basement, asking for clothespins and sheets.”

He arrived at Kenyon on the advice of Tony Award-nominated composer Mel Marvin, one of his mentors. “He encouraged me to go to a liberal arts school because he said you have to know more than how to write a good tune to be successful in the musical theater,” Yandura said.

Kenyon gave him exactly what he was seeking. “I got in as a music major and took as many drama classes as I could, but I also took courses in subjects such as sociology and psychology,” he said. “The environment helped me figure out who I was an as artist and helped prepare me for grad school.

“Kenyon is such a wonderful melting pot because so many people come there from all over the country and the world.”

Yandura met Melocik in the Graduate Musical Theatre Writing program at New York University, and they have worked together ever since. New York City Children’s Theater owned the rights to Spinelli’s book and chose the Yandura-Melocik team to adapt it. “Wringer” tells the story of a 10-year-old boy who befriends a pigeon during his town’s annual pigeon shoot. “It is such a great story that lends itself to music,” Yandura said. “We had the freedom to do whatever we wanted.”

Yandura and Melocik are working on other projects, including a collaboration with playwright Harrison Rivers ’04. “We are quite busy,” Yandura said. “Commissions are what every writer hopes for. We have four right now, so we’re not starving.” 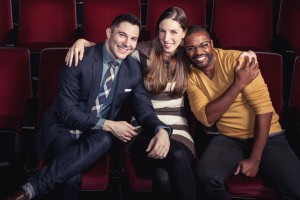 Alumni reconnect through their work shown at a prestigious New York theater festival.